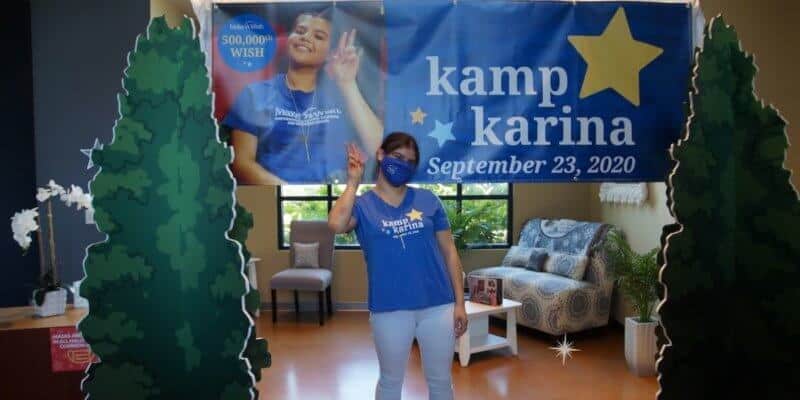 The Walt Disney Company and the Make-A-Wish Foundation have been working together to grant life-changing wishes for the past 40 years. And since the first wish was granted at Disneyland, Disney and Make-A-Wish have granted over 140,000 wishes!

This month, Make-A-Wish granted their 500,000th wish! And it’s no surprise that Disney was a part of it.

The 500,000th wish was a beautiful and heartwarming gesture from a 16-year-old girl named Karina. According to the Disney Parks Blog, during her childhood, Karina has made magical memories at summer camp. care-free moments that remind her of more simple and stressless times.

It was based on these memories that she wished “to give kids a day to forget they’re sick.”

With that, Karina and Make-A-Wish created a virtual camp to put smiles on kid’s faces called “Kamp Karina.”

The day-long camp was streamed on Youtube and included a series of fun activities live a magic show, a science class, story time, and some Disney surprises!

The Walt Disney Animation Studios taught the children how to draw some of everyone’s favorite Frozen characters! The drawing class was hosted by a professional animator, and it also had the presence of Olaf’s sweet cheerful voice actor, Josh Gad.

There was also a Disney-themed trivia put on by Disney Parks, Experiences and Products as part of Disney Family Game Night.

ESPN was also part of the fun! They put 32 kids, and Karina, in the virtual stands for Game 4 of the Eastern Conference Finals.

And at the end of the camp, there was a magical surprise Disney-style… a firework show!

What a magical way to celebrate an impactful moment, don’t you think? Let us know in the comments below.