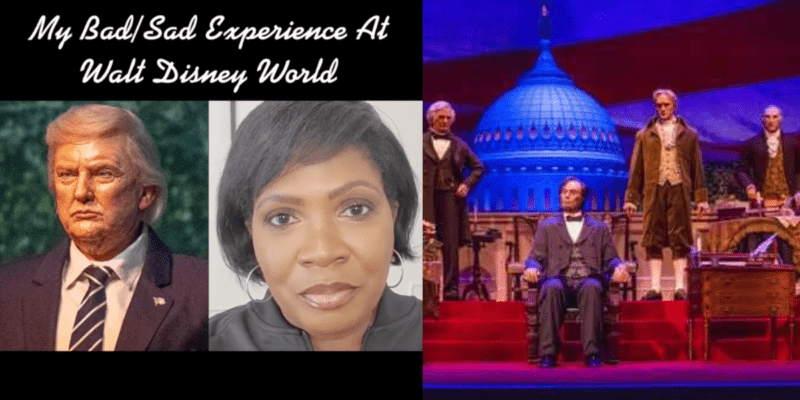 Throughout the last few years, we’ve reported an uptick in political disruptions at Disney Parks. From political clothing choices to protests boldly flying Nazi flags, the United States’ tumultuous political climate has made its mark on Walt Disney World Resort.

One Guest detailed a disheartening, politically-charged experience she had at Magic Kingdom on TikTok:

I know I chose simple words to describe this experience at @Walt Disney World, but #bad and #sad feel the most appropriate. @Disney Parks delivers great customer service, and it’s unfortunate that a complaint from me would change absolutely nothing. #Disney #HallOfPresidents #DisneyWorld #WaltDisneyWorld #DisneyParks @Disney

Darnella Dunham visited the Disney Park with her two nine-year-olds. It was their first visit, and she wanted her children to witness Walt Disney World Resort’s 50th Anniversary Celebration.

Dunham visited Walt Disney World Resort when she was around the same age and vividly remembered watching The Hall of Presidents in Liberty Square. She said she “really appreciated” the experience, especially the audio-animatronic figures of each United States President.

Unfortunately, Dunham had a less-than-magical experience revisiting The Hall of Presidents with her children. As each president’s name is called, a spotlight shines on his respective audio-animatronic figure. For most of this scene, Dunham said other Guests were quiet and respectful.

“President Trump…people, like, burst out in applause,” Dunham recalled. “That’s cool if you support Trump, but that’s not what people were doing. Everybody was just being respectful.”

Dunham wasn’t upset by the cheering but was disgusted when what appeared to be the same Guests booed for President Joe Biden. “If you cheered for Trump, that’s one thing. But to boo Biden was just so disrespectful because, at the end of the day, I’m sure plenty of people in that auditorium were not supporters of Donald Trump. But they didn’t boo him when his name was announced, and his figure started moving.”

“It was really disheartening that people brought that energy to Disney,” Dunham said. “It just seemed inappropriate. Hopefully, the divisiveness in our country when it comes to politics will die down sooner than later because it’s a really good experience. But it just kind of sucks that people ruin this wonderful, educational opportunity for children by bringing politics and making it feel so hateful when, ultimately, Walt Disney just wanted to celebrate the Presidents of the United States.”

In the caption, Dunham noted that while Walt Disney World Resort is known for excellent customer service, she was disappointed that a complaint about this behavior at The Hall of Presidents would likely make no difference.

More on The Hall of Presidents

The Hall of Presidents opened alongside Magic Kingdom on October 1, 1971. After each presidential election, a new audio-animatronic is added to reflect the nation’s latest leader. From Disney:

Behold all 45 Presidents of the United States in a stirring show tracing the nation’s history.

Have you ever witnessed a disruption at The Hall of Presidents?