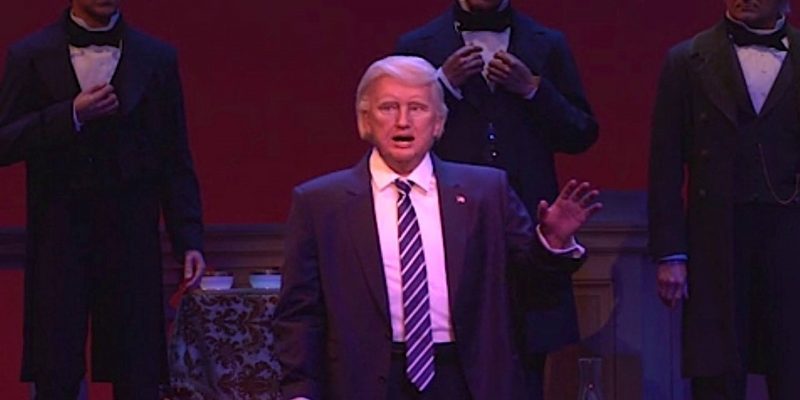 Nearly a full year after closing back in January, The Hall of Presidents has reopened after undergoing a transformation.

The attraction first soft opened on Monday, December 18 with Tuesday, December 19 announced to be its official reopening date, complete with enhancements that bring the story of the American presidency to life like never before. Among those enhancements is of course the new audio animatronic of President Donald Trump, featuring the latest advances in technology that enable smoother and more lifelike movements.

WATCH – DONALD TRUMP ANIMATRONIC DEBUTS IN THE HALL OF PRESIDENTS:

WATCH – Full Donald Trump speech in the Hall of Presidents When the president was revealed earlier this morning during one of the attraction’s show times, every phone in the hall flew up to catch a glimpse of the new animatronic. Some guests even applauded during the animatronic president’s speech, which was recorded by Trump himself.

In person, the Trump animatronic is extremely lifelike. It contains incredibly realistic and natural looking mannerisms and expressions, similar to the actual president. The animatronic even features some smaller details, such as wrinkles and smile lines, which only enhance the robot’s ability to immerse guests into the attraction even further, as if they really were in a hall with every president ever in history.

President Trump’s speech in the updated attraction is as follows:

From the beginning, America has been a nation defined by its people. At our founding, it was the American people who rose up to defend our freedoms and win our independence. It is why our founders began our great constitution with three very simple words: we the people. Since that moment, each generation of Americans has taken its place in the defense of our freedom, our flag and our nation under God.

These are the achievements of the American spirit. The spirit of a people who fought and died to bring the blessings of liberty to all our people. Above all to be American is to be an optimist, to believe that we can always do better and that the best days of our great nation are still ahead of us.

It’s a privilege to serve as the President of the United States, to stand here among so many great leaders of our past and to work on behalf of the American people.”

Trump recorded his own lines for The Hall of Presidents, just as each president has done for the attraction since the early 1990’s.