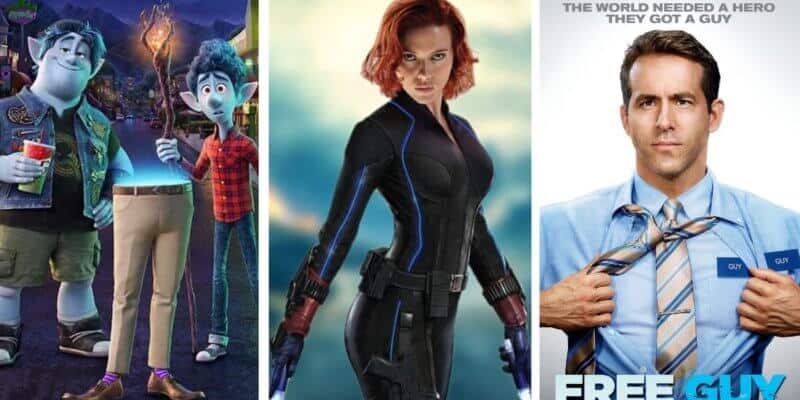 2019 was filled with a variety of hit Disney and Marvel films.

The live-action Dumbo, Aladdin, and The Lion King all made their debut in 2019, each one being practically perfect in their own way. Marvels’ Avengers: Endgame and Captain Marvel also hit theaters and set records at the box office in 2019. And we can’t forget about those highly anticipated sequels Toy Story 4 and Frozen 2.

It’s safe to say 2019 was a huge success for Disney movies across the board, but 2020 is going to be packed full of upcoming films, too! Let’s take a look at all the films we know of that are making their debut next year.

The Call of the Wild

The Call of the Wild is an upcoming live-action CGI-animated adventure film, which is based on Jack London’s 1903 novel The Call of the Wild. It will also be a remake of Twentieth Century Pictures’ 1935 film. Harrison Ford stars.

This film will follow a girl, lost on a mysterious island, who fights to save her family, her freedom and the spirit of youth.

Onward will follow the story of two teenage elf brothers, Ian and Barley Lightfoot (played by Tom Holland and Chris Pratt) who go on a journey to find out if there’s still some magic left, so they can spend one last day with their father, who unfortunately passed away when they were too young to remember him.

This live-action version of the Disney Animated Classic, Mulan, will follow the story of a fearless woman, played by Liu Yifei, who disguises herself as a man in order to save her father from serving in the army.

The New Mutants is the thirteenth and final installment in the X-Men film series.

Antlers is an upcoming supernatural horror film that follows a mysterious creature who escapes from its confinement and wrecks a small Oregon town.

Debuts in theaters: May 1

Scarlett Johansson’s superhero character, Black Widow, will finally get her own film as Natasha Romanoff (aka Black Widow).

The Personal History of David Copperfield

Debuts in theaters: May 8

The Woman in the Window

Debuts in theaters: May 15

A psychological suspense that follows the character, Dr. Anna Fox, as she witnesses something she shouldn’t. The Russell family seems to be the picture-perfect clan that lives across the way, but Dr. Anna Fox thinks otherwise.

Debuts in theaters: May 29

Artemis Fowl is a series of eight science-fiction fantasy novels. It follows the story of a twelve-year-old mastermind, Artemis Fowl, who has just discovered a world underground, consisting of armed, dangerous, and high-tech fairies. He ends up kidnapping one of them and holds her for ransom in an effort to restore his family’s fortune.

This Disney Pixar film follows a middle-school music teacher who dreams of one day playing at the legendary New York jazz club, The Blue Note. It will star Jamie Foxx and Tina Fey.

This upcoming 2020 science fiction action comedy film will star Ryan Reynolds as a bank teller discovers he is actually a background character in an “open-world video game”, called Free City, which will go offline soon.

It will be produced by 20th Century Fox and distributed by Walt Disney Studios Motion Pictures.

This 2020 Disney film is based on the classic Disney attraction and will star Dwayne Johnson, who is also producing the movie, as well as Emily Blunt and Jesse Plemons.

This film follows the trail of a missing girl, as an ex-cop comes across this secret group who is attempting to summon a supernatural spirit.

The One and Only Ivan

Based on a book that’s based on real-life events, it follows the story of a silverback gorilla, who is named Ivan, and lived in a cage at a mall.

A man must race against time in order to stop history’s worst criminal masterminds as they decide to get together and plot a war, which could potentially wipe out millions of people and destroy all humanity.

Death on the Nile

Death on the Nile will follow Detective Hercule Poirot as he investigates the murder of a young heiress while aboard a cruise ship on the Nile River.

Everybody’s Talking About Jamie is an upcoming British-American musical drama film, based on the musical of the same title.

A married couple who have fallen out of love begin playing deadly mind games against one another, which turns into them seeing those around them dying.

Raya and the Last Dragon is an upcoming animated film that takes place in a re-imagined Earth inhabited by an ancient civilization. It follows a warrior named Raya, who is determined to find the last dragon.

West Side Story is an upcoming film adaptation of the Broadway musical of the same name.

Which Disney film are you looking forward to most? Let us know in the comments.