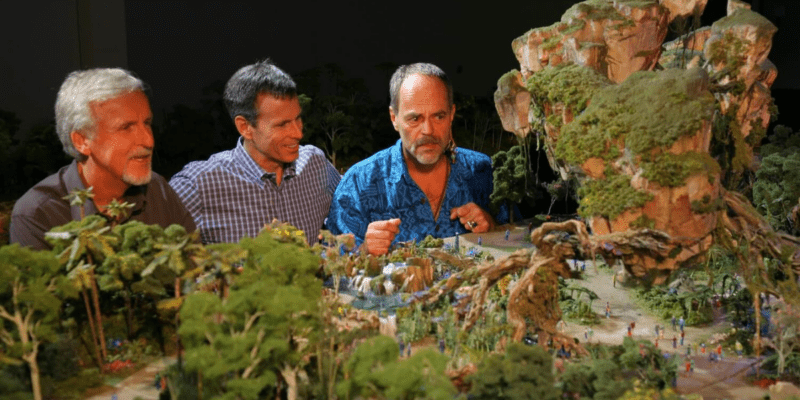 Legendary Disney Imagineer Joe Rohde, who has created a massive legacy across Disney Parks worldwide, recently cleared up a significant discrepancy between the Avatar franchise and the land inspired by the film at Disney World, Pandora – The World of Avatar.

Disney Parks worldwide have come to life in all their magic and glory thanks to the work of thousands of Cast Members and Disney Imagineers, each master of their own trade. From architects to artists, engineers, plumbers, construction workers, cooks, carpenters, and so many more, the legacy of thousands of hands that helped shape Disneyland Resort, Walt Disney World Resort, Tokyo Disney Resort, Shanghai Disney Resort, and Hong Kong Disneyland will live in the hearts of Disney fans forever.

Thanks to this, many Disney fans worldwide have, at least once, dreamt of hearing all the stories and learning all the secrets from Disney Imagineers like Bob Gurr, Joe Rohde, Bob Weis, and Tony Baxter. The mesmerizing documentary The Imagineering Story (2019) — currently available on Disney Plus — helped millions of fans immerse themselves in the history of the Walt Disney Company through the development of Disney Parks worldwide. In addition, thanks to social media, Legendary Imagineers like Bob Gurr, Joe Rohde, and Bob Weis often share messages with their fans and followers giving additional insight into Disney history or providing information from their knowledge about Disney Parks and the rides they home.

Legendary Disney Imagineer Joe Rohde is particularly known for being responsive with social media users, often voicing his opinion on the latest Disney developments, the current condition of attractions, future plans for the Parks, and even attractions most people had forgotten — or weren’t even aware of. In his latest interaction, Joe Rohde cleared up a significant discrepancy between Pandora – The World of Avatar, a land he helped develop at Disney’s Animal Kingdom, and the film franchise that inspired the land, Avatar, from Director James Cameron.

The discussion started when a Twitter user shared a screenshot from a recent Tumblr post from lennythereviewer, comparing Pandora – The World of Avatar at Disney’s Animal Kingdom and the Avatar franchise from Director James Cameron and 20th Century Studios. The post reads:

Literally Both Avatar Movies: “Humans are greedy, evil colonizers who want to eradicate the Na’vi to mine Unobtanium and to claim Pandora as their own. They can’t be allowed to set foot on this world”

Avatar in the Disney parks: “Humans colonized Pandora but it’s fine now! We TOTALLY co-exist in peace now and opened the sacred land for tourists! Come look at the funny blue aliens!!”

User @house_myth became aware of the discrepancy and took to Twitter to ask the Legendary Imagineer his thoughts on said post, commenting:

@Joe_Rohde any thoughts on this? The land is my favorite area in any theme park, but after #AvatarTheWayOfWater we definitely are the bad guys

@Joe_Rohde any thoughts on this? The land is my favorite area in any theme park, but after #AvatarTheWayOfWater we definitely are the bad guys 😔 pic.twitter.com/HNE92soTqc

Joe Rohde (@Joe_Rohde) commented that, while Pandora – The World of Avatar is inspired by James Cameron’s Avatar (2009), “the land exists well beyond the film timelines.” The former Imagineer added that parkgoers are “Guests of the Na’vi” and admitted that “cultural tourism in the real world is a chancy gamble,” possibly referring to the abysmal difference in the relationship between the Na’vi and humans portrayed in the films and at Disney’s Animal Kingdom. His full tweet reads:

Well. The land exists well beyond the film timelines. (They could go anywhere plotwise) The marquee more or less says It’s a superfund cleanup site operated by biologists and We are guests of the Navi. But…it’s true that cultural tourism in the real world is a chancy gamble.

Well. The land exists well beyond the film timelines. (They could go anywhere plotwise) The marquee more or less says It’s a superfund cleanup site operated by biologists and We are guests of the Navi. But…it’s true that cultural tourism in the real world is a chancy gamble. https://t.co/TUrPgebBXC

The post quickly gathered fans who took the chance to thank Rohde for his work at Pandora – The World of Avatar, Disney’s Animal Kingdom, and across The Walt Disney Company, and tried asking further questions about the land, including why no Na’vi were walking around the land; to which the Imagineer answered it would be “Very very very very very expensive.” Rohde did not share any further comment on the land or its storyline in the Twitter thread.

The release of Avatar: The Way of Water brought an all-new nighttime spectacular — along with a wave of new merchandise and dining offerings — to Disney’s Animal Kingdom. The show was developed in collaboration with filmmakers from the Avatar franchise, Walt Disney Imagineering, and Disney Live Entertainment to bring a unique display of lights and effects inspired by Pandora and Avatar to the Tree of Life. And while there have been rumors of changes and upgrades happening at Pandora – The World of Avatar and Disney’s Animal Kingdom with the release of the long-awaited sequel, Avatar: The Way of Water, and further installments from the popular franchise, Disney has not released any official information addressing this information.

Joe Rohde’s footprint goes beyond the Valley of Mo’ara. The Legendary Imagineer not only led the creation of Pandora – The World of Avatar, but he created the entire Disney’s Animal Kingdom Park!

“Of course, no theme park had ever been based on animals, and the rulebook for how to do a theme park didn’t match up very well with animals. So it really started with the analysis of how could we ever take this system—the theme park system and everything that it represents—and what would we have to modify and change to get it to work with animals,” said Rohde in an interview with Disney D23 when reminiscing about his 40-year career creating Disney Magic.

In addition to Disney’s Animal Kingdom and Pandora – The World of Avatar, Joe Rohde worked on several attractions and projects like the Mexico and Norway pavilions at EPCOT, the refurbishment of Fantasyland at Disneyland, the Captain EO 3-D film attraction starring singer Michael Jackson, Disney’s Aulani in Hawaii, and the transformation of the former The Twilight Zone Tower of Terror into Guardians of the Galaxy – Mission: BREAKOUT! at Disney California Adventure. All this is without mentioning that Rohde served as the model for Harrison Hightower, the owner of the Hightower Hotel, which houses the Tower of Terror attraction at Tokyo DisneySea, and even became a character of Gideon’s Bakehouse in Disney Springs.

More on Pandora – The World of Avatar

As Guests explore this world of wonder, they can gaze upon the enormous floating mountains of Pandora, discover exotic plants that come to life with beautiful bioluminescence each night, find Na’vi totems and other cultural items found throughout the land, and experiment with a Na’vi-built drum circle, containing instruments playable by all. Guests may even come across tour guides from Alpha Centauri Expeditions (ACE), scientists from the Pandora Conservation Initiative (PCI), or even an eclectic expat or two!

Disney states the following regarding Pandora – The World of Avatar

Journey to an all-new, awe-inspiring land that celebrates the magnificent power of nature.

In partnership with ACE, visitors of every age will have the chance to explore the values and culture of this exotic place, and celebrate the striking beauty and overwhelming power of the natural world.

Welcome to Pandora—a world similar to Earth… but distinctly unique in so many ways!

Have you visited Pandora – The World of Avatar at Disney’s Animal Kingdom? Would you like to see elements from Avatar: The Way of Water come to the land? Let us know in the comments below!