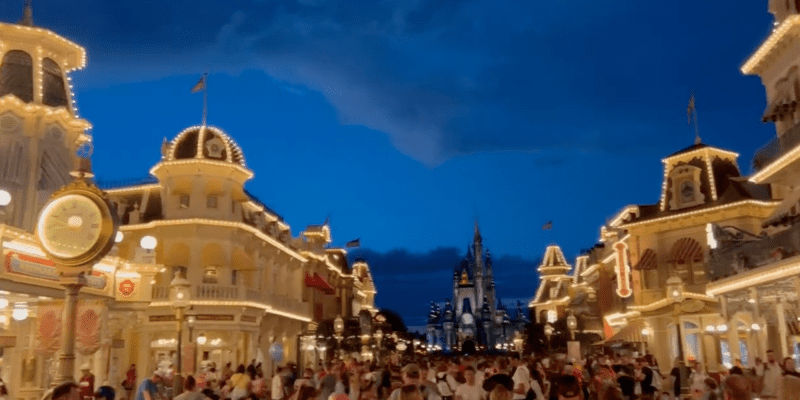 As Floridians have officially gone back to school, Walt Disney World theme parks are looking like a ghost town ahead of Labor Day Weekend.

Walt Disney World is home to four theme parks — Magic Kingdom, EPCOT, Disney’s Hollywood Studios, and Disney’s Animal Kingdom. Guests from all around the world travel to Orlando, Florida to experience the magic of Disney World and everything it has to offer, including its one-of-a-kind nighttime spectaculars.

Despite the backlash Disney Enchantment has received from fans, Magic Kingdom Guests continue to line up along Main Street, U.S.A. every evening to watch the night sky light up with fireworks.

However, because many Floridians have gone back to school, the last week of August at Walt Disney World is considered a “low crowd” week, and that is definitely shown in the video shared to Twitter by RandomDisneyDude:

Even though it looks like there are many Guests lined up on Main Street, U.S.A., waiting to witness Disney Enchantment, this is nothing compared to what an average summer evening typically looks like. Guests are usually packed in, shoulder to shoulder, making it very difficult to walk through. However, in the video above, you can see that Guests are able to walk down Main Street, U.S.A. with ease.

Additionally, wait times have been lower than average as many Magic Kingdom attractions posted a 5-20 minute StandBy line.

This is a great sign for those visiting Walt Disney World this week ahead of Labor Day Weekend.

We do want to note that recently, Disney CFO Christine McCarthy stated that Park’s capacity would never return to normal as they are “managing things differently now”. This sparked quite the conversation amongst Disney fans as many can’t imagine what “full capacity” would look like.

As we approach the holiday season, we expect to see the Park Pass availability continue to sell out so if you are planning on visiting Walt Disney World and its four theme parks — Magic Kingdom, EPCOT, Disney’s Hollywood Studios, and Disney’s Animal Kingdom — be sure to secure your Park Passes as soon as possible.

When visiting Magic Kingdom, Guests can ride attractions such as Pirates of the Caribbean, “it’s a small world”, Splash Mountain, Haunted Mansion, Space Mountain, Carousel of Progress, and more. Or if they have the Park Hopper option, after 2 p.m., hop over to EPCOT, Hollywood Studios, or Disney’s Animal Kingdom for even more Walt Disney World fun!

Do you have plans to visit Walt Disney World this week? Let us know in the comments below.

If you want to visit Walt Disney World and its four theme parks — Magic Kingdom, EPCOT, Disney’s Hollywood Studios, or Disney’s Animal Kingdom — on your next family vacation to experience everything the Parks have to offer, visit the official Walt Disney World website to start planning today.