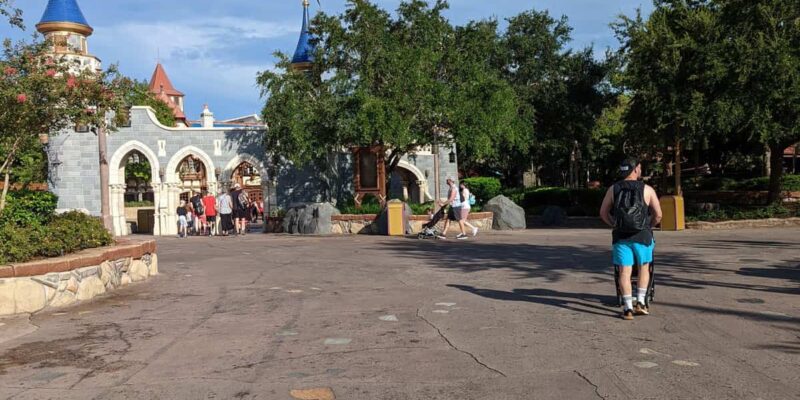 The Walt Disney World Resort may have found itself intrinsically tied to the terms “stressful”, “pressure”, and “frustrating” in recent months, but for Guests at Magic Kingdom Park today, that couldn’t be further from the truth.

Crowds have vanished; rope drop is quiet; and Genie+? Who needs it when wait times are unusually low?

Last October marked a momentous occasion for the Disney Parks in Orlando, Central Florida. The World’s Most Magical Celebration commenced with new nighttime shows like Disney Enchantment at Main Street, U.S.A. and Cinderella Castle, and daytime experiences like the oft-discussed (and critiqued) Disney KiteTails over at Disney’s Animal Kingdom. Amid the festivities, Disney World also welcomed the Resort’s newest attraction, Guardians of the Galaxy: Cosmic Rewind in EPCOT’s World Discovery neighborhood.

Not forgetting the exclusive Disney Park merchandise, mainstay events like EPCOT’s International Food & Wine Festival, and the reopening of the Disney Resort’s full catalog of hotels, there have been plenty of reasons to visit the fan-favorite vacation destination over the last year.

However, it would be remiss not to mention the sticking points in visiting the Disney World theme parks in today’s market. A reduction in Guests through the divisive Park Pass and Park Hopper reservation systems, as well as the equally polarizing Disney Genie+ and a la carte Lightning Lane Selections that “help” manage attraction flow, have seen continued backlash especially as Disney Parks revenue continues to climb. The inclusion of pay-wall style commodities has significantly worked in The Walt Disney Company’s favor in terms of profit but has left many Guests feeling that the magic is gone.

That being said, the Floridian Parks are coming out of a busy summer period — the first summer, too, where the Parks have had the majority of the complete Disney World package open for business. The Fourth of July holiday saw 1.7 million visitors descend on Orlando International Airport, alongside Florida schools on summer break and a hefty amount of tourism from places like United Kingdom, it’s easy to see why the theme parks were bustling.

No, Magic Kingdom is a ghost town. Guests entered the Park at Park opening, just half an hour after Resort Guests were permitted entry and encountered an unexpected quiet — a far cry from the horror stories many have heard over the past few months. Photos below from various locations in the Park, including Cinderella Castle, Fantasyland, and Frontierland, show just how quiet Magic Kingdom is today.

The wait times for attractions are also low. This morning the Seven Dwarfs Mine Train, usually one of the Resort’s most popular rides, posted a 20-minute wait. The My Disney Experience app currently shows attractions like Big Thunder Mountain Railroad and Pirates of the Caribbean at five minutes, while over at Disney’s Hollywood Studios Star Wars: Rise of the Resistance — a ride notorious for hitting triple digits — is at 60 minutes. All times are correct at the time of publication.

While the drastic change in both crowds and attraction queues feels odd, at least in comparison to the level of Guests seen over the summer weeks, there are a couple of reasons that it can be attributed to. Florida schools returned to operation this week and in terms of international tourism, the U.K. school term also begins soon. There is also the case of the Halloween festivities — Mickey’s Not-So-Scary Halloween Party takes place at Magic Kingdom tonight with Party Guests able to enter the Park from 4 p.m. suggesting that non-Party Guests may likely be staying clear and utilizing their precious theme park reservation Park Passes elsewhere.

But, regardless of the reason behind the Magic Kingdom ghost town, for some, a quieter theme park will definitely be warmly received.

Crowd level have remained low as the week progresses.  On Wednesday, we reported the positive effects of park attendance falling as wait times for rides drop.  Thursday saw much of the same as guests were pleasantly surprised by the lack of normal crowds. Stay tuned to Inside the Magic as we head into the holiday weekend in anticipation of lower crowd levels.

Do you think Walt Disney World feels quieter this week? Let us know in the comments down below!