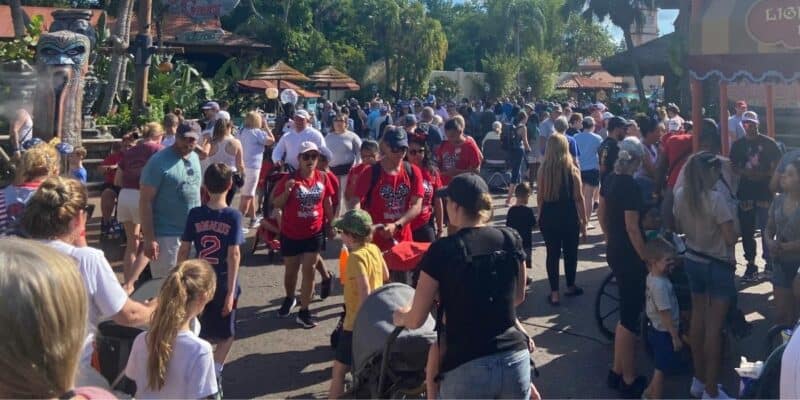 The Fourth of July is almost here, and this Independence Day multiple travelers will be descending on Orlando, Central Florida. Coincidentally — or not so considering the Resort’s popularity — one Disney theme park at the Walt Disney World Resort is completely booked solid…for seven days straight!

It’s by no means of a secret that Orlando’s Walt Disney World Resort is packed. Regardless of The Walt Disney Company’s Park Pass and Park Hopper reservation systems, and capacity being lower than pre-pandemic times, many Guests are experiencing high crowd levels, long wait lines for attractions (yes, even with the addition of Disney Genie+ and Lightning Lane), and queues for Disney Resort buses. This is eased somewhat by the Early Theme Park Entry option for Guests staying on Disney property in a Resort hotel like Disney’s Wilderness Lodge or Disney’s Caribbean Resort as long as they have valid Walt Disney World tickets.

Disney is standing by their decision to implement the divisive Park Pass reservation systems, which allows Guests to book their chosen theme park (Magic Kingdom Park, Disney’s Hollywood Studios, Disney’s Animal Kingdom, and EPCOT) months in advance, with the service extended until at least 2024. And while Park Hopper hours don’t begin until 2 p.m., there is a rumor that more reservations may be coming to the Disney Resort.

Unfortunately, while the Park Pass system allows Disney to monitor and manage expectant crowds, it does leave some Guests completely shut out of their chosen destination. Those wanting to ride Space Mountain or witness Disney Enchantment take over Main Street, U.S.A., and Cinderella Castle at Magic Kingdom will now not be able to — at least for the next seven days.

Guests visiting Magic Kingdom on both July 3 and July 4, will see Disney Enchantment replaced with the return of Fourth of July fireworks — Disney’s Celebrate America! — A Fourth of July Concert in the Sky. With a sold-out theme park, this event is likely to draw plenty of spectators so Guests should plan ahead if they are wanting a good spot for the nighttime spectacular. Of course, if Guests are staying somewhere like Disney’s Contemporary Resort, they will see the fireworks, just from afar.

As for the other Disney Parks, Disney’s Hollywood Studios is also fully booked on July 3, July 5-7, and EPCOT is also sold out on July 4. Disney’s Animal Kingdom is available all week.

“Everyone is eager to get back out there, but like every other industry, aviation is also feeling the effects of staffing shortages, inflation, and high fuel prices,” Brian Engle with the Greater Orlando Aviation Authority said in a statement.

And as people become more reinvigorated to travel following the rebirth of various industries that became shuttered due to the pandemic, the report also notes that “[t]ravel experts report airline tickets have increased 14% compared to this time last year.”

It looks set to be a busy week at the Walt Disney World Resort.

Are you visiting the Disney Parks this Fourth of July? Let us know in the comments down below!