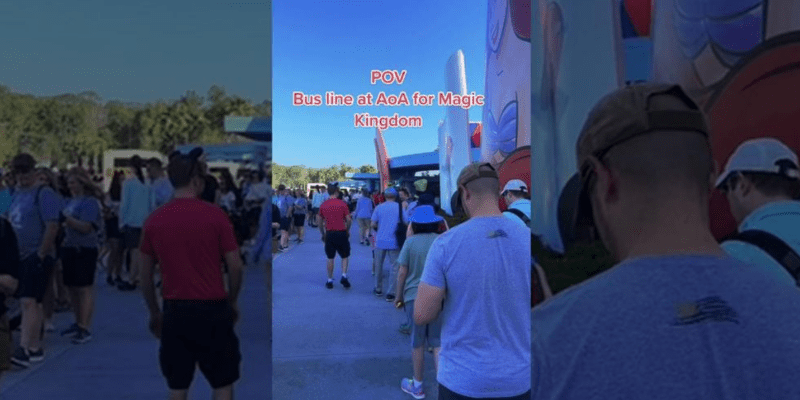 Speaking of current crowd levels, many Disney World Resort Guests have been taking to social media to share frustrations, including those relating to Resort bus lines.

On a recent Walt Disney World vacation, one TikTok user was staying at Disney’s Art of Animation Resort. When we arrived at the Resort bus lines in the morning, they were shocked at how long the line was.

With the amount of families visiting the Most Magical Place on Earth, and with Disney World operating at a higher capacity than they were last year, seeing crowds at the theme parks isn’t too surprising; however, we understand how frustrating it can be waiting in lengthy lines, especially first thing in the morning when all Guests want to do is get to the Park they are planning to visit.

In the video below, which was posted to TikTok by @pixiedustbrmstxandbeyond, you can see Guests wrapped multiple times, resulting in an insane line!

The TikTok user explained that because they are a party of seven, they try to avoid using Lyft or Uber as much as possible, especially when going to Magic Kingdom because they must drop Guests off at the Ticket and Transportation Center, meaning Guests must still utilize a ferry boat or Monorail to get to Magic Kingdom.

They did admit that luckily the line moved quickly, despite the line being insanely long, but they still had to wait approximately 45 minutes before boarding a bus.

How long have you waited for a bus at a Disney Resort? Let us know in the comments below.