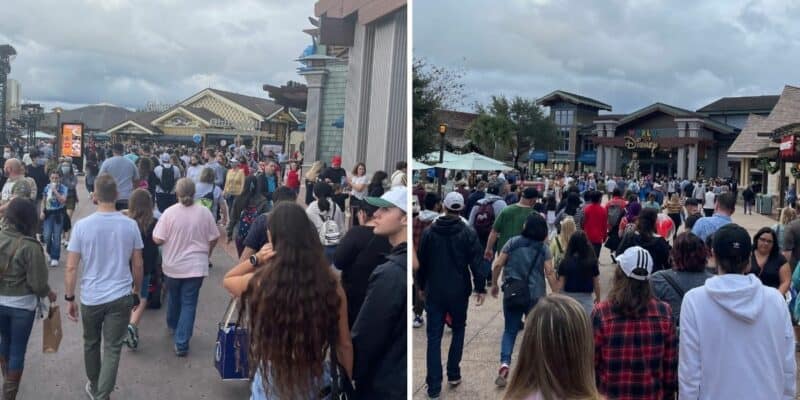 If you are planning on visiting Disney World during the holiday season this year, get ready to face the biggest crowds that the theme parks have seen since prior to the pandemic.

Going to Walt Disney World Resort during the Christmas and New Year’s Eve season is a popular time for many as a lot of children are out of school with nothing else to do, and some parents are able to receive extra time off during this time. Much like the summer months when kids are out of school, the final few weeks of December are often packed at Disney World.

This year, the rush began with Thanksgiving, which is always known as a busy time of year at Disney as Guests can use the holiday as one less vacation day, and since then, we have only noticed more and more people packing in. At Magic Kingdom, EPCOT, Disney’s Animal Kingdom, and Disney’s Hollywood Studios, Guests need a Disney Park Pass reservation to get in as the Park’s still have some sort of capacity limit on them — and even with that limit which is seemingly continuously increased, Disney Park Passes are running out!

Omicron has already been announced as the most predominant strain of COVID-19 in Orange County. With crowds only growing in Orlando this holiday season, the volume of people in town may shock some who have not been in crowded areas for the last while due to the ongoing pandemic.

Below, you can see the massive daytime crowds at Disney Springs, the downtown shopping and eating district for which Guests do not need a Disney Park Pass reservation for. Although internal stores such as World of Disney may hit a capacity limit, Guests do not need to make a reservation to enter. Personally, I have experienced shoulder-to-shoulder crowds recently, which has led me to wonder if the capacity limit that the Parks are using extends to Disney Springs.

All of that being said, Disney is doing all that they can to ensure safety with a ton of sanitizer stations available, as well as indoor mask mandates being put into action, even while Governor DeSantis has lifted all mask mandates for the state of Florida.

At the moment, Guests can meet Santa Clause at Disney Springs and sign up for the wait on the My Disney Experience app if they are interested in saying hello! Santa is also meeting in EPCOT in the American pavilion and starting today, will be available to see to see during the Mickey’s Once Upon a Christmastime Parade which will be running during regular Park hours!

What do you think of these large holiday crowds? Let us know in the comments below!