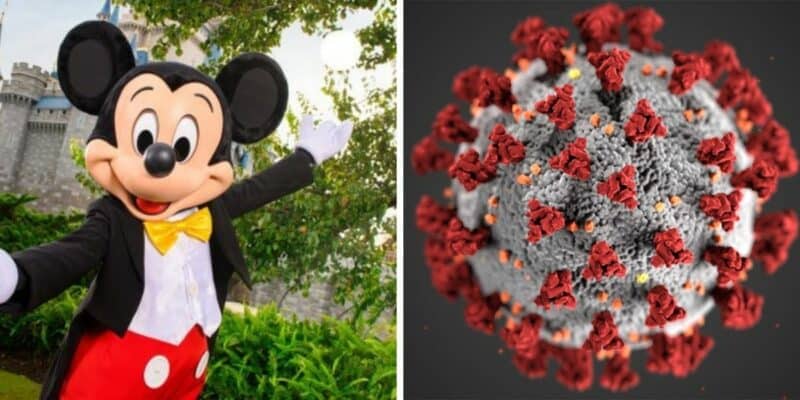 With Walt Disney World continuing its phased reopenings after the pandemic forced Disney to shut the Resort down last year, Guests are now packing the theme parks for Christmas.

But with the first case of Omicron being confirmed in Florida this week, it now seems the COVID-19 variant is more prevalent than initially theorized.

In late November, the first detected COVID-19 variant was discovered in South Africa, with Omicron hitting Flordia on December 7, 2021, at the James A. Haley Veterans Hospital in Tampa.

The variant has spread rapidly throughout several countries, reaching the United States this month. On December 1, the Center for Disease Control and Prevention confirmed that the first case of the Omicron variant of COVID-19 was detected in the United States from California and San Francisco Departments of Public Health.

And according to the Orlando Sentinel, the new Omicron variant is now the predominant strain of COVID-19 in Orange County, Florida –  the home of Magic Kingdom, EPCOT, Disney’s Hollywood Studios, and Disney’s Animal Kingdom.

In a recent White House report, Orange County was recently named a hotspot for COVID-19, and now it seems the Disney county is being overtaken by Omicron.

The discovery was made through wastewater testing, as there still have not been any clinical cases of the Omicron variant in Orange County. The Orlando Sentinel reports:

The variant first discovered in South Africa swiftly surpassed the delta variant in collections taken from county wastewater sampling sites, said Ed Torres, the public works director. However, the mutation of the virus hasn’t been traced to a clinical infection here yet, officials said.

The wastewater surveillance has been used to get a jump on the transmission of the novel coronavirus, and first predicted the delta surge over the summer.

Last week, the testing found inconclusive amounts of omicron, and with each new collection, totals increased, Torres said. The mutation was also found in Altamonte Springs’ wastewater system, which covers parts of Orange and Seminole counties.

“Omicron has become the dominant variant we’re seeing,” Torres said. “What you’re seeing is the clinical cases aren’t reflecting omicron just yet. If the symptoms are less, as we’re seeing some reports, it may just be that people aren’t going to the hospital.”

In a news conference held at Orlando International Airport, Orange County Mayor Jerry Demings reported that “those who are hospitalized are being primarily infected by the Delta variant.”

The Orlando Sentinel goes on to report about the urgency to get people vaccinated:

Dr. Anthony Fauci, director of the National Institute of Allergy and Infectious Diseases, said early findings show that current vaccines and boosters stand up to the new variant.

Apparently, 76% of people who have recently been infected with COVID-19 in Orange County are not fully vaccinated.

Omicron is now the most predominant strain in Orange County, but the Disney World county is currently reporting lower numbers of infection than they were this same time last year.

According to a local state health officer, the positivity rate over 14-days has remained at 3.8% compared with 9.2% last year during the same period.

While it is still very early to say how the Omicron variant will have an impact, there is some optimism circulating that reports the variant may be less serious than the initial COVID cases experienced when the pandemic began in 2020.

We’re yet to see any major changes to theme park giants Disney or Universal’s health and safety policies regarding the Omicron variant, but will keep you updated if any regulations are amended.

For information and questions about the COVID-19 omicron variant, be sure to follow along with the Center for Disease Control and Prevention website.

Has the Omicron variant affected any of your future Disney plans? Let us know.