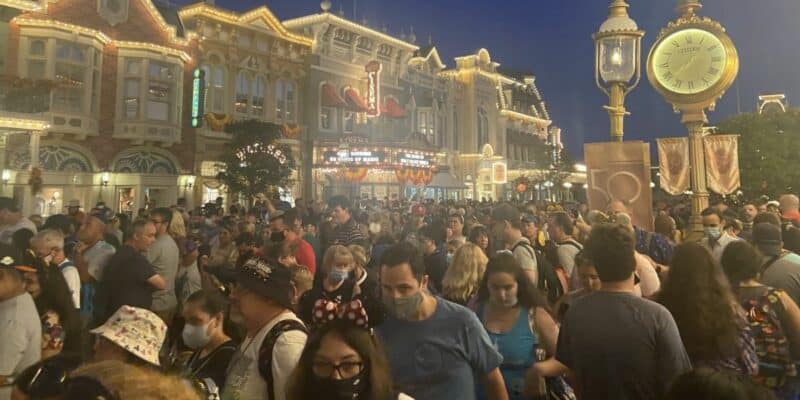 Walt Disney World officially kicked off its 50th anniversary celebration this morning and Guests were quick to pack into the heart of the Resort, the Magic Kingdom. There were massive lines to get into the stores as people wanted to get their hands on exclusive merchandise, and mobile orders took nearly an hour to fill. However, there was one event that has seemingly drawn more of a crowd than anything else.

Tonight, for the first time, Disney’s newest fireworks show, Disney Enchantment will premiere for Guests at the Magic Kingdom. Guests looking to secure their viewing spot packed into the Magic Kingdom hub, as well as all the way down Main Street, U.S.A. hours before the show started. Inside the Magic reporters were at the Park and found a viewing spot along with thousands of other Guests.

Take a look at the insane crowds below!

Now, when people grab their spots to a show that early, it is typical for them to sit down and rest their feet after a long day of magic. That, in turn, makes the crowds appear more crowded in some spots because people sitting takes up more room than people standing. You can see a ton of people sitting on Main Street as they wait for the enchantment to begin.

Disney Enchantment will run the entire 18 months of the 50th anniversary and could remain around longer if it is extremely popular. Here is more information on the new show from the Walt Disney World website:

Guests began hunting for the perfect viewing spot earlier in the day, but crowds really surged to the area in the few hours before the show started.

In order to make sure that you can see the brand new nighttime fireworks show, be sure to check show times on your My Disney Experience app.

How early do you like to claim your fireworks viewing spot? Let us know in the comments!