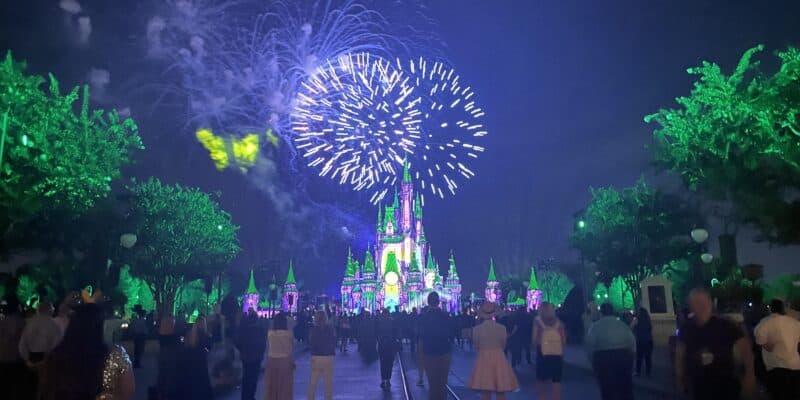 Inside the Magic was among the selected media invited to attend the event, and after seeing the show, I have gathered my thoughts on Magic Kingdom’s new nighttime spectacular. When Disney Enchantment was revealed as the new firework show, Disney fans were not yet told Happily Ever After was leaving for good. Disney fans were shocked once Disney announced the show was ending after a much shorter run than Wishes.

Many were sad to see a show that brought so many emotions to Guests was leaving. Still, knowing that Disney Enchantment would be even bigger, projecting onto Main Street, U.S.A., I personally tried to stay optimistic about the incoming show, as I am one of many who loved Happily Ever After from the moment I saw it.

Replacing the classic “Happily Ever After” song is “You Are the Magic” which has already become quite catchy to my ear. It has not yet won over “Happily Ever After” for me yet, but over time I can easily see this song becoming a new favorite. The show opens with Angela Bassett narrating, and has stunning projections. Disney really brings many characters to life on Cinderella Castle, which to me, matched Happily Ever After.

The show also utilizes the 50th castle look well, with the Beacons of Magic coloring appearing throughout the show in various ways. Happily Ever After was a show that was meant to give Guests a sense of hope, in my opinion, where you were looking for that happily ever after. Disney Enchantment is more of an empowering show as it tells Guests that they have magic within them. You do still get a beginning, middle, villains section, and conclusion. The music pulls in new songs such as “Into the Unknown” from Frozen 2, and newer characters from films like Coco, which is great to see as we have not seen these songs used in a Magic Kingdom evening show yet.

As for the fireworks, they looked great and were timed perfectly to the music, as to be expected. The fireworks are not larger than Happily Ever After, in my opinion, but not less either. The biggest change here is that we now have Main Street, U.S.A. projections which significantly add to the show. You will not see them come to life until the show gets underway, which gives the show an added build that Happily Ever After never had. The projections are subtle, but pulse energy through Main Street, U.S.A., and also offers Guests more viewing options.

If I were to give the show a critique after one viewing, I would say that I wish we saw a few moments that would have brought Guests through Disney World over the past 50 years, as we are celebrating the anniversary. Like Happily Ever After, the story and show are IP-driven, which Guests will surely love to see. As a big Disney fan, I would have loved to see a montage of the castle as it transformed over the years, Mickey Mouse, and other parts that could have served as more of a history section which would lead to the creation of IP’s, really taking Guests on a journey through time.

That being said, I am sure that someone visiting Disney World for the first time will love the show. It was tough to say bye to Wishes, and then we all fell in love with Happily Ever After; I have a feeling Enchantment will do the same. The show is best seen in person, so I would suggest waiting until you can see the show, if you are able to over the next 18 months, before you make a final judgment!

The show officially debuts on October 1 at Magic Kingdom.

What do you think of Disney Enchantment? Let us know in the comments below.

Note: This article does not reflect the views of all at Inside the Magic.