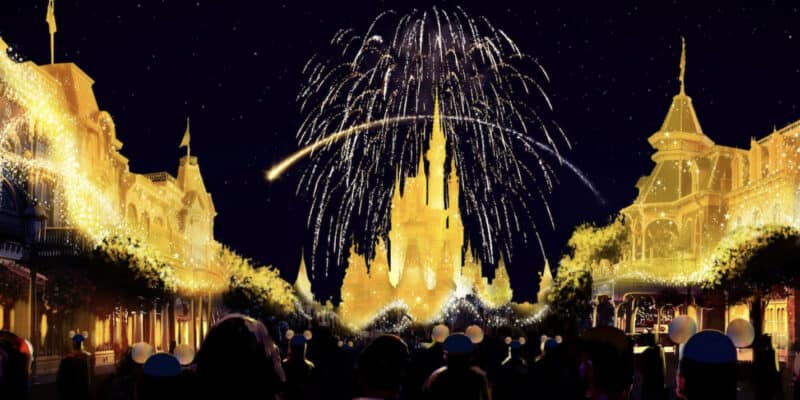 Disney Enchantment officially debuts at Magic Kingdom Park on October 1 as part of Walt Disney World Resort’s 50th anniversary, The World’s Most Magical Celebration. Tonight, fans will actually have the opportunity to watch a live stream of the show online, thanks to Disney Parks Blog! But what should they expect?

Well, to give you an idea of this “enchanting” show, here’s a bit of background information from Disney:

We had the wonderful opportunity of attending a media preview event of Walt Disney World Resort’s 50th anniversary. During the event, we spoke with Mark Renfrow, Show Director of Disney Enchantment, who shared some pixie-dusted details about the new fireworks spectacular.

If you read our prior coverage, then you would know that Tinker Bell (who fans will recall from Happily Ever After) will still fly over Magic Kingdom during the Disney Enchantment nighttime spectacular. But will there be any other elements from past Disney firework shows that fans should keep their eyes peeled for? Renfrow says yes!

Here’s what Disney’s Mark Renfrow had to say:

“With a show like Disney Enchantment, it’s all about magic. So I think you’re going to see nods in different ways to show that have come before it. We love everything that has been here before and we know that our Guests do as well. So I think we put purposefully little moments, almost like little Easter eggs, moments that touch the heart. If it touched the heart before, why not try that again? But it might be in a different way.

So I think you’re going to have moments, even musically in the score, working with our composers, there’s little moments in there. Just like visual Easter eggs, this has some audio Easter eggs in there. So for those that really know the shows inside and out, keep your ears open, you might hear a little nod as well.”

With Magic Kingdom firework shows like Wishes and Happily Ever After being Guest-favorite traditions to experience at Walt Disney World, it’s so amazing to know that there will be Easter eggs (both visually and audibly!) from past firework shows incorporated in Disney Enchantment. Of course, you’ll have to watch tonight’s live stream or visit Disney World for yourself to find out exactly what those Easter eggs are!

Click here to book a Walt Disney World vacation for the opportunity to see Disney Enchantment in person during the 50th anniversary!