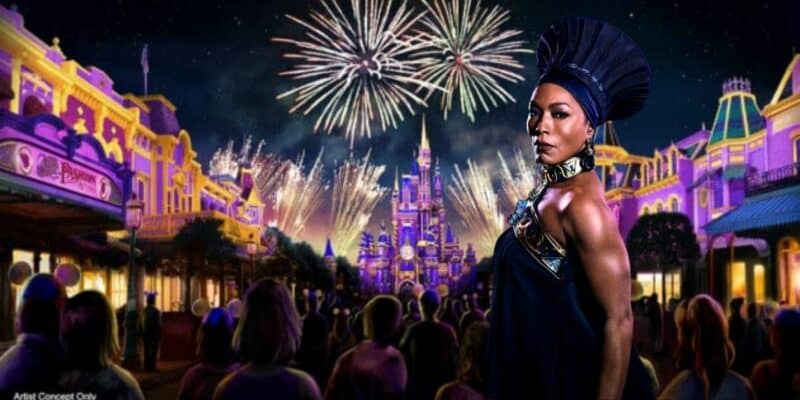 Disney Enchantment is the new firework show that will officially debut tomorrow, on October 1! And now, we know a new narrator will grace Guests each night.

Yesterday evening, Guests had to say goodbye to Happily Ever After, Magic Kingdom’s nighttime show that created magic for Guests each night since 2017. The show remained closed for a while due to the pandemic, which is what made saying goodbye even more difficult for many as its time was cut short.

Now, Guests are nervously anticipating Disney Enchantment, the new firework show which is being put in place for the 50th anniversary celebration. We have not yet seen the show, as the first media preview will not be until this evening, but we now know that there will be a narrator similar to Happily Ever After, and she will have a familiar voice.

Angela Bassett has been confirmed as the voice of Disney Enchantment. The actress will narrate during the show, as well as be the voice of the announcements that remind Guests that the show is about to begin! Knowing this is exciting news because not only can we look forward to hearing Bassett’s voice, but we know that the show will once again be telling a story.

Angela Bassett is no newcomer when it comes to Disney. Angela has voiced Mildred in Meet the Robinsons, Dorothea Williams in Disney/Pixar’s Soul , and Groove in Whispers: An Elephant’s Tale. Of course, Bassett plays a strong role in the MCU as Queen Ramonda of Wakanda in Black Panther and Avengers: Endgame, then reprised the role in the 2021 series What If…?. She also has narrated an episode on The Imagineering Story, which was clearly a precursor to a much more significant role to come!

Disney Enchantment has been said to blow Guests away as the show will not only project onto Cinderella Castle, but Main Street, U.S.A. allowing Guests to watch with a new view from multiple areas. Disney describes the show as:

Are you excited to see Disney Enchantment at Magic Kingdom?