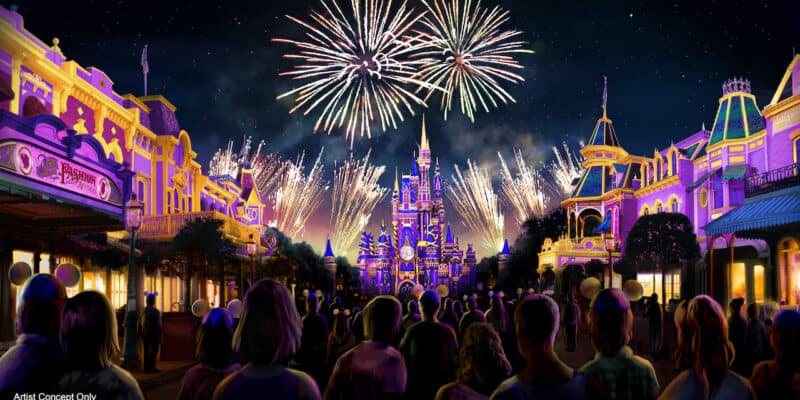 As Walt Disney World Resort gears up for its 50th anniversary, a lot more new offerings will be coming to the parks.

When the theme Park icons were announced, we knew Magic Kingdom would decorate Cinderella Castle, Disney’s Hollywood Studios would give the Tower of Terror some shimmer, Disney’s Animal Kingdom would project onto the Tree of Life, and Spaceship Earth over in EPCOT would receive a permanent change as points of light would be added to the ball so that it would shine outward. We recently saw testing of the Beacons of Light, which you can check out by clicking here.

There have also been banners come to the parks! We originally saw the rose gold shimmer come to Magic Kingdom, but now we can see that banners are coming to the rest of the parks! The gold Monorail is also now covered in a 50th wrap, and more signage is being added to the property.

One of the biggest changes that Guests will soon see at Magic Kingdom is the departure of Happily Ever After and the arrival of Disney Enchantment. Disney Enchantment is set to be bigger than ever and has been promised to live up to Guest expectations. With the show coming up soon, testing must be done! In order to test fireworks, Disney will do so later at night.

When fireworks are tested, Resort Guests in the area are always made aware. Recently, the Walt Disney Cast and Community Facebook page noted:

There’s a lot happening around the Walt Disney World Resort! At Magic Kingdom Park, there will be late night fireworks two nights this week, currently scheduled for Monday and Saturday between 11:30 PM and 1 AM. A helicopter will also be gathering footage across the resort for future use starting Monday through Wednesday this week. We will do our best to keep noise at a minimum, and thank our neighbors and Guests for their understanding.

So, it seems that Guests looking to get a sneak peek of Disney Enchantment this week are in luck, especially if they are staying at Disney’s Contemporary Resort! Considering the fireworks will be going off much later in the evening, staying at one of the Monorail Resorts, including Disney’s Grand Floridian Resort and Disney’s Polynesian Village Resort would be your best bet!

Are you planning on getting a first look at Disney Enchantment?