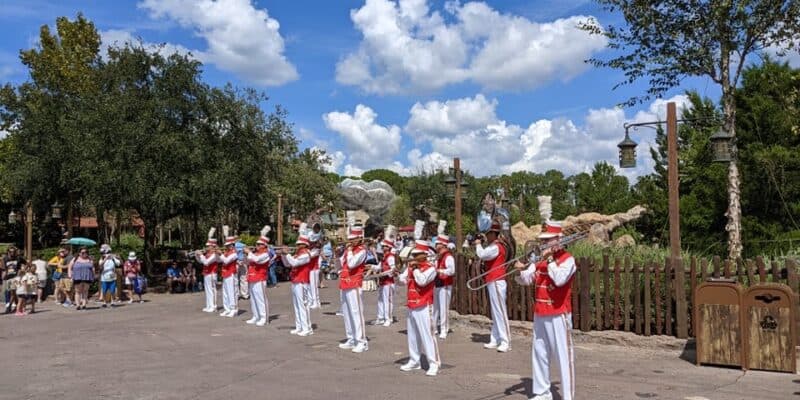 The Most Magical Place on Earth, Walt Disney World Resort, has officially kicked off its 50th anniversary, The World’s Most Magical Celebration. All throughout today, we’ve been sharing the magic that we’ve experienced while visiting Magic Kingdom to bring you some pixie dust! And now, we have some an amazing video to share — the Main Street Philharmonic performing in Fantasyland!

While we were at Magic Kingdom today, one of our Inside the Magic reporters decided to experience some of the lowest wait times we’ve seen lately. After riding Seven Dwarfs Mine train, Inside the Magic’s Katrina A. noticed a very magical surprise. The beloved and historic Walt Disney World band, the Main Street Philharmonic, was performing just outside the attraction. Take a look at the video and photos below!

A Cast Member nearby was telling Guests that surprises like this were expected to occur at the theme park throughout their visit, so we’ll be sure to keep our eyes peeled for more magic Disney World has in store today and onward during the 50th anniversary.

For example, there is a special cavalcade called Mickey’s Celebration Cavalcade that you can catch throughout the day, featuring Mickey Mouse, Minnie Mouse, and all their friends dressed in their EARidescent outfits. This truly is a magical celebration filled with so much fun and pixie dust!

Drum roll, trumpet call! Marching down the street clad in brightly colored uniforms, this 12-piece brass and percussion ensemble is a sight to behold.

Performing old-school marches, big band hits and familiar classics with their high-flying harmonics, this band is a crowd-pleasing favorite with Guests.

Listen for songs like “Take Me Out to the Ball Game”, “76 Trombones” and “Alexander’s Ragtime Band.” When the band is ready to exit, they usually play the “Mickey Mouse Club March.”
They even take requests, so make yours before they march away!

Click here to book your next vacation to the vacation kingdom, Walt Disney World Resort in Florida!