Disney Confirms "More Magic On the Way" For 50th! - Inside the Magic 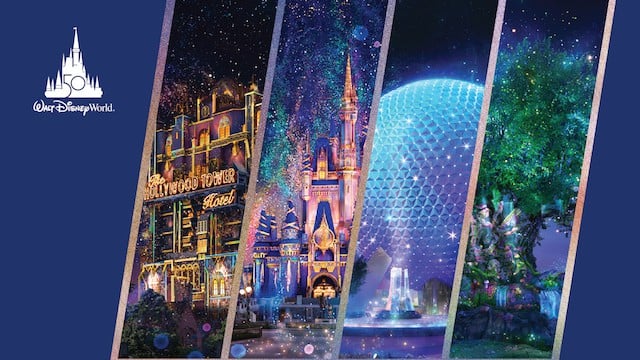 It seems too hard to believe, but after months of excitement and build-up and planning, Walt Disney World will kick off its massive 50th anniversary celebration TOMORROW! There isn’t one part of the massive Resort that won’t be a part of the celebration and Guests can experience anniversary magic at not only all four theme parks, but also at Disney Resorts, Disney Springs, and even on the monorail!

Disney made a ton of announcements today, saying that October 1 will not be the only dates where new magic comes to Walt Disney World. A ton of new offerings and experiences will be coming in the 18-month span of time that the party will last. Disney shared an amazing video on its YouTube channel, discussing all that’s to come.

Let’s take a look at some of the incredible offerings Disney teased:

Star Wars: Galactic Starcruiser will begin transporting Guests to a galaxy far, far away on March 1, 2022.

Remy’s Ratatouille Adventure will not be the only new attraction coming to EPCOT during Disney World’s 50th anniversary. Guardians of the Galaxy: Cosmic Rewind will also be making its debut at the theme park in 2022.

Guardians of the Galaxy: Cosmic Rewind will be a massive, indoor Omnicoaster — which means that Guests will be rotated in any direction as they ride along the track. This type of coaster comes from the amazing brains of the Disney Imagineers and will be a first-of-its-kind experience for Walt Disney World Resort Guests.

Disney is all about making the Guest experience as seamless, and now touchless, as possible — which is why they have created things like MagicBands and MagicMobile.

However, in 2022, MagicBands will be getting one heck of an upgrade, in the form of MagicBand+. MagicBand+ will allow Guests who purchase the specific bands to interact with all the Fab 50 statues that can be found throughout all four theme parks.

MagicBand+ will also enable Guests to become bounty hunters at the Black Spire Outpost in Star Wars: Galaxy’s Edge, and while Guests are enjoying nighttime shows like Disney Enchantment, the MagicBand+ will light up in time with the show!

Smart assistants like Google Home and Amazon Echo have become a staple in many households, and now it will become a staple at the Walt Disney World Resort! Disney announced that they teamed up with Amazon to bring “Hey, Disney” to not only households across the country, but also to all Resort hotel rooms.

“Hey, Disney” will be a part of the optional Amazon Alexa service and will give Guests a customized assistant, complete with Disney stories, characters, and more.

Disney has not announced an official date for when “Hey, Disney” will come to hotel rooms and homes across the country.

WOW. Now that it is a lot of exciting new stuff that we have to look forward to! In the meantime, Guests visiting Walt Disney World will be able to experience new nighttime shows, the new Ratatouille ride, and a bunch of new food and merchandise.

It is going to be one heck of a “Most Magical Celebration on Earth”!

What new experience coming to Disney World are you looking forward to most? Let us know in the comments!