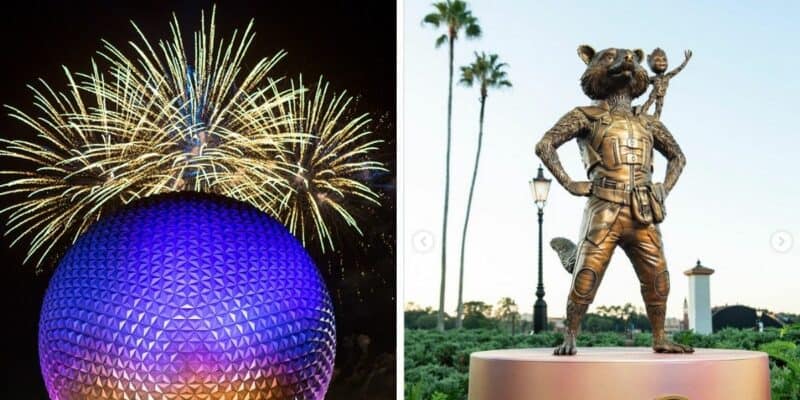 In just over two weeks, Disney will be kicking off its massive 50th Anniversary celebration. The party will last for 18 months and a number of exciting things — including new fireworks and attractions — will be coming to the Magic Kingdom, Hollywood Studios, Animal Kingdom, and EPCOT. However, prepping for a party like that doesn’t happen overnight, so Disney has slowly been giving the theme parks their 50th makeovers.

Back in June, Disney announced that it would be creating 50 gold statues — appropriately named the Fab 50 — to honor the characters who helped bring Disney magic to life. Those statues would be interactive and would be found throughout all four theme parks. Even though it is not quite time for the 50th Anniversary, Guests visiting the Disney World Resort right now can actually see some of those statues in person.

Some Fab 50 statues made their Magic Kingdom debut on September 9, and now even more have been installed at EPCOT. Disney Imagineer Zach Riddley shared the exciting news on Instagram, as well as pictures of the amazing statues.

It’s an exciting day here in EPCOT! Today, the EPCOT Disney Fab 50 Character Collection sculptures have all found their way to their new homes for the 50th Anniversary of Walt Disney World! Friends original and new – each character represents this spirit of EPCOT of a world where anything is possible with ….

“Imagination, imagination.
A dream, can be, a dream come true. With just that spark, from me and you.”✨🌈

We can’t wait for you to come to EPCOT to see them soon! 🌐

One of the more prominent statues to make its debut is a character who, over the years, has become the face of EPCOT — the adorable purple dragon, Figment! Other characters making their EPCOT debut are Miguel and Dante from Coco, Olaf the snowman from Frozen, and Rocket Raccoon, and Groot from Marvel’s Guardians of the Galaxy.

With Disney revealing its Fab 50 statues at both the Magic Kingdom and EPCOT, it shouldn’t be long until the rest of the statues are also revealed throughout Animal Kingdom and Hollywood Studios.

Disney World’s 50th Anniversary celebration will begin on October 1 and run until May 2023.

Which Fab 50 statue are you the most excited to see in person? Let us know in the comments!

CLICK HERE to book your magical Walt Disney World Resort vacation with our friends at Academy Travel – an EarMarked Diamond travel agency that can provide you with a free quote today!

Comments Off on Fab 50 Statues Make Their EPCOT Debut!