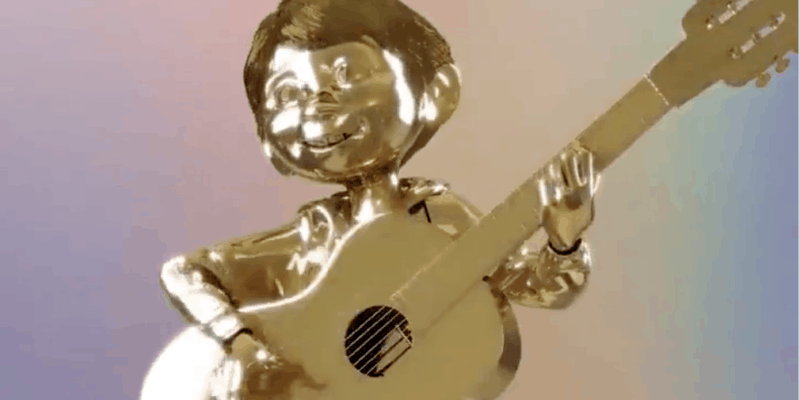 It’s hard to believe, but in just under one month, Disney World will officially start to celebrate its 50 Anniversary. The festivities will begin on October 1 and run all the way through May 2023 — that’s 18 months of celebration! There will be a brand-new fireworks show called Disney Enchantment at Magic Kingdom, a new kite show at Animal Kingdom, a new attraction at EPCOT, decorations all over the place, and more!

To commemorate 50 years of The Most Magical Place on Earth, Disney is also launching its first-ever interactive statues that will be found throughout the Magic Kingdom, Hollywood Studios, EPCOT, and Animal Kingdom. These statues will be called the Fab 50 and will honor the characters that helped bring Disney magic to life. Disney has released pictures of almost all of the statues that Guests will get to see — including Lumiere and Cogsworth from Beauty and the Beast, Timon and Puumba from The Lion King, Mickey, Minnie, and Donald.

We now know another Pixar character that will be joining the ranks of this elite — musical dreamer Miguel from the 2017 film Coco! Back in July, Disney announced that the loveable alebrije Dante would be at EPCOT, and on September 4, Disney announced that Miguel would be joining him. Miguel and Dante share a special connection, so it is a lovely tribute to a beautiful movie to put them both in the same place.

Pixar star Anthony Gonzalez, who voiced Miguel in the film, shared the exciting news about the statue coming to EPCOT.

Just in time for ‘Together We Are Magia’, a set of @waltdisneyworld offerings in honor of Hispanic Latinx Heritage Month – Anthony Gonzalez, the voice of Miguel in Disney and Pixar’s film “Coco”, has shared that Miguel will be part of the four theme parks’ “Disney Fab 50 Character Collection” that you’ll soon see during “The World’s Most Magical Celebration” beginning October 1. #DisneyWorld50

More Fab 50 statues that Guests can find at EPCOT include the adorable purple dragon, Figment, Rocket Raccoon and Groot from Guardians of the Galaxy, and Olaf and Bruni from Frozen 2.

Walt Disney World’s 50 Anniversary celebration will kick off at all four theme parks on October 1, 2021.

Which Fab 50 statue is your favorite? Let us know in the comments!

CLICK HERE to book your Walt Disney World Resort vacation with our friends at Academy Travel – an EarMarked Diamond travel ageny that can provide you with a free quote today!