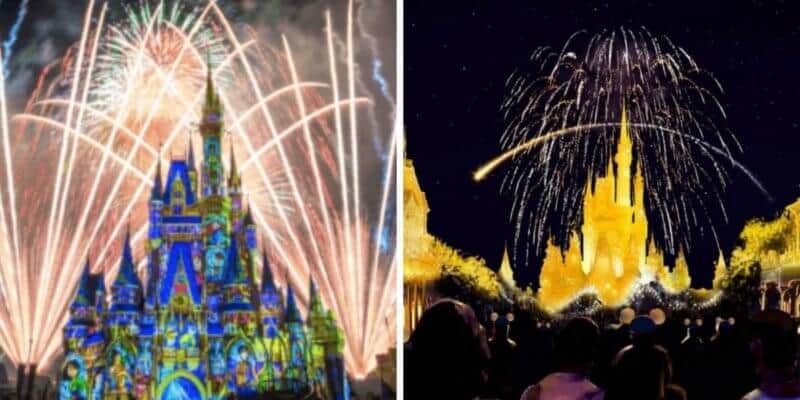 With Disney’s 50th anniversary celebration coming in just a few months on October 1, Guests are getting excited for all the new offerings to come.

Melissa Valiquette, Vice President of Magic Kingdom, sat down with the Theme Park Rangers podcast (ran by Orlando Sentinel) to discuss Magic Kingdom, from the 50th anniversary to attractions. When the topic of the Disney Enchantment firework show came up, Melissa said, “We’re working really hard to make sure we can deliver the spectacular experience our Guests expect from us.”

Disney has always celebrated anniversaries in a big way. Melissa noted that the company gets excited by them and recognizes the “special-ness” of them, “but this is an anniversary like no other”. Melissa also mentioned that every Park would have a “piece in the show” when it comes to the 50th, and Magic Kingdom’s will be Disney Enchantment.

There have already been sneak peeks of the show revealed. Melissa recalled visiting Magic Kingdom in the middle of the night last week to see some elements of the show, as it is in its final development right now. They did not run the fireworks, but all of the “other elements,” as Melissa described, were in play.

Melissa went on to say that this will be a spectacular show with immersive projections, lighting effects, and fireworks. Melissa also hyped up how exciting it is that Disney World will be having a show at Magic Kingdom that will project all the way down Main Street, U.S.A. This will create an expansive viewing area for the show, so every spot could be great to enjoy the show.

Disney Enchantment will be unique in its own right and different than any nighttime spectacular that has come before it. Melissa concluded, “I have no doubt it will become our Guests favorite new show.”

Do you think that Disney Enchantment will be able to top Happily Ever After? Let us know in the comments below!