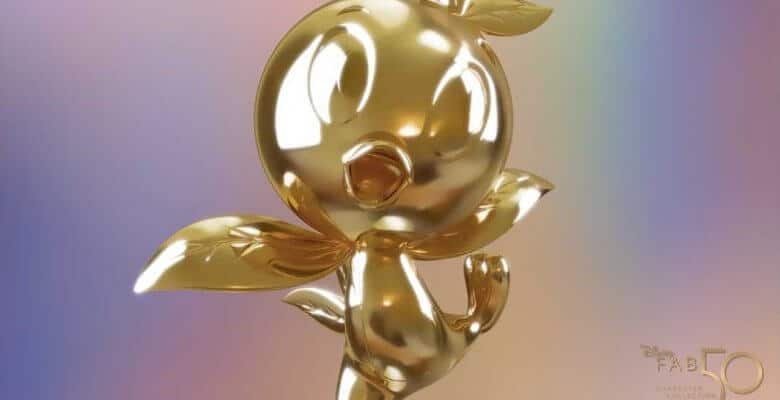 Ladies, and Gentleman, the 9th wonder of the world…. ahem… the Golden Orange Bird! Our favorite fowl has now been added to the Disney Fab 50th Character Collection found across all four theme parks at Walt Disney World Resort. He will be flying over Magic Kingdom park during the World’s Most Magical Celebration beginning on October 1, 2021.

Thinking orange thoughts has always been Orange Bird‘s way to communicate, but now he’s scheduled to be shining through Magic Kingdom’s birthday celebration in the form of a golden statue. Found on D23’s Instagram page, we get the first look at our favorite fowl’s debut in gleaming gold.  The caption on the introductory video reads,

“We’re thrilled that our very own Michael Vargo, Head of D23, announced today that Orange Bird will soon be part of the “Disney Fab 50 Character Collection” at the @WaltDisneyWorld Resort during “The World’s Most Magical Celebration” starting October 1 #DisneyWorld50”

D23.com tells us, along with revealing Orange Bird’s golden debut,

The “Disney Fab 50 Character Collection” will be featured across all four theme parks. Fifty golden character sculptures wait to be discovered during “The World’s Most Magical Celebration,” starting October 1. Be on the lookout for gilded sculptures of beloved characters throughout the parks. More of the sculptures will be revealed leading up to the celebration, so stay tuned to social media to see which of your favorite characters will join the jamboree!

Joining in on the fab 50th fun are other previously announced golden statues, including our favorite characters such as,

We’re sure the list isn’t ending there, as the castle logo leaves room for all sorts of Disney friends. Stay tuned to Inside the Magic for future Fab 50 Character Collection statue reveals!

Ready for your magical vacation? Turn everything you touch to gold with the help of the pros at Academy Travel. You’ll be able to see the Fab 50 Character statues in person when you plan your vacation with the help of a free travel agent. Click today and choose your destination!

Do you love the addition of an original Magic Kingdom Mascot? Leave us a comment below!