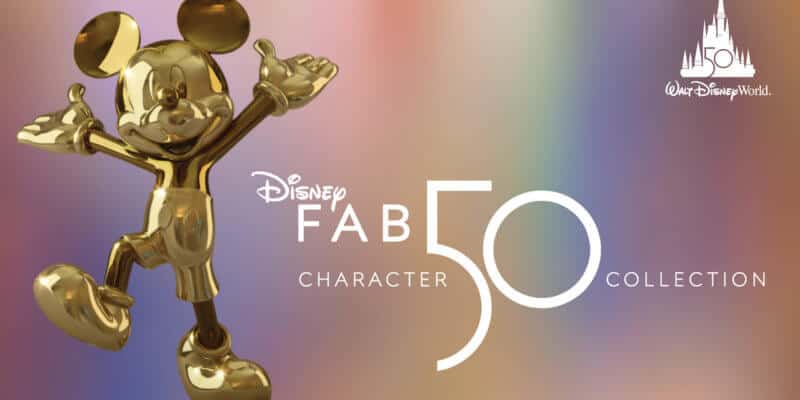 There are a lot of magical things coming to the Walt Disney World Resort as it prepares for its 50 Anniversary celebration, which will begin on October 1, and run for 18 months! As part of that preparation, Disney is unveiling the statues that will be a part of what it is calling its Fab 50 collection. So far, Mickey, Goofy, and  Timon and Pumbaa statues have been revealed to Guests. And now we have another reveal!

Today, Disney’s newest Fab 50 statue was revealed, and you will recognize the duo from the classic film Beauty and the Beast (1991). Belle’s enchanted friends Lumiere and Cogsworth will be showcased at Disney’s Magic Kingdom theme park as a part of the celebration. The announcement was made by none other than Susan Egan, the woman who first brought Belle to life on the stage.

Susan took to Disney’s Instagram to make the special announcement, where followers were also able to get a first look at the statue before it comes to the Magic Kingdom.

The dining room is proud to present… Susan Egan! The original Belle from @DisneyOnBroadway’s Beauty and the Beast has revealed that Lumiere and Cogsworth are part of the “Disney Fab 50 Character Collection” that you’ll soon find across the four @WaltDisneyWorld theme parks during “The World’s Most Magical Celebration” starting October 1 #DisneyWorld50

Lumiere and Cogsworth might be some of the most famous frenemies in the Disney universe. Their constant jabs, but ultimate affection, for each other make them one iconic duo. They used their powers for good and helped the Beast rediscover his humanness and fall in love with Belle. While they were originally introduced in the animated 1991 film, they play an equally large role in the 2017 remake, who’s official Disney description reads:

The story and characters you know and love come to life in this spectacular live-action adaptation of Disney’s animated classic Beauty and the Beast, celebrating one of the most beloved tales ever told. Experience the fantastic journey of Belle, a bright, beautiful and independent young woman who sets off to rescue her father but is taken prisoner by a Beast in his castle. Despite her fears, she befriends the castle’s enchanted staff and learns to look beyonds the Beast’s hideous exterior to realize the kind heart of the true Prince within.

While all of the statues that have been announced as part of the Fab 50 collection so far will be found at the Magic Kingdom, you will be able to find Fab 50 statues throughout all four Walt Disney World Resort theme parks.

Disney World’s massive 50 Anniversary celebration will kick off on October 1 and run until 2023!

Are you excited to see the Cogsworth and Lumiere statue as part of Walt Disney World’s 50 Anniversary celebration? Let us know in the comments!

CLICK HERE to book your magical Walt Disney World Resort celebration with our friends at Academy Travel – an EarMarked Diamond Agency that will provide you with a free quote today!

Comments Off on ‘Beauty and the Beast’ Duo Added to Fab 50 Collection!