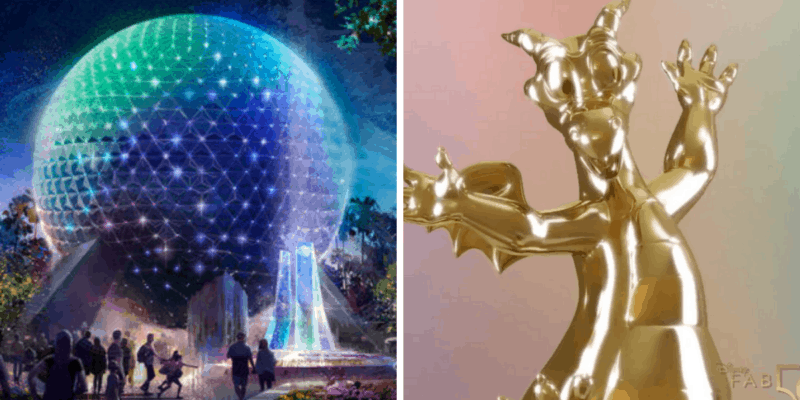 We are officially under the 50-day marker until the Walt Disney World Resort kicks off its epic 50 Anniversary Celebration. As part of the 18-month-long event, Disney has been revealing golden character statues that will be found throughout the four theme parks and will be called the Fab 50. So far, Guests have seen the artwork for Mickey Mouse, Donald Duck, Cheshire Cat, Cogsworth, Lumiere, and more!

Now, one iconic Disney Imagineer is introducing Guests to yet another one of these fabulous golden statues. On August 13, Imagineer Tony Baxter showed fans the artwork for the new Figment statue that would be coming to EPCOT for the 50 Anniversary. The exciting video presentation was shared on D23’s Instagram page.

Tony Baxter is a legendary Disney Imagineer and the creative mind behind the adorable purple dragon, and his two tiny wings, eyes big and yellow. Baxter first introduced Guests to Figment in 1983 with the attraction Journey Into Imagination. Since then, the ride has undergone several transformations, but Figment has always remained a staple.

Not only is Figment the symbol of imagination, but he has become the symbol of EPCOT in general. EPCOT hosts multiple festivals throughout the year, including the International Food & Wine Festival, the Flower & Garden Festival, and the Festival of the Arts. With those numerous festivals comes a ton of fun merchandise, and Figment can usually be found on a lot of it.

All four of Disney World’s theme parks will celebrate the milestone anniversary in their own unique way. The Magic Kingdom — the heart of The Most Magical Place on Earth — will see Cinderella Castle all decorated, along with a new fireworks show called Disney Enchantment.

A ton of new and exciting EARidescent 50 merchandise will be coming to the theme parks — including the popular spirit jerseys, ears, and Loungefly backpacks!

Are you excited to see Figment take his place among the Fab 50 statues? Let us know in the comments!

CLICK HERE to book your Disney World Resort vacation with our friends at Academy Travel – an EarMarked Diamond travel agency that can provide you with a free quote today!

Comments Off on Beloved EPCOT Icon Receives Own Fab 50 Statue