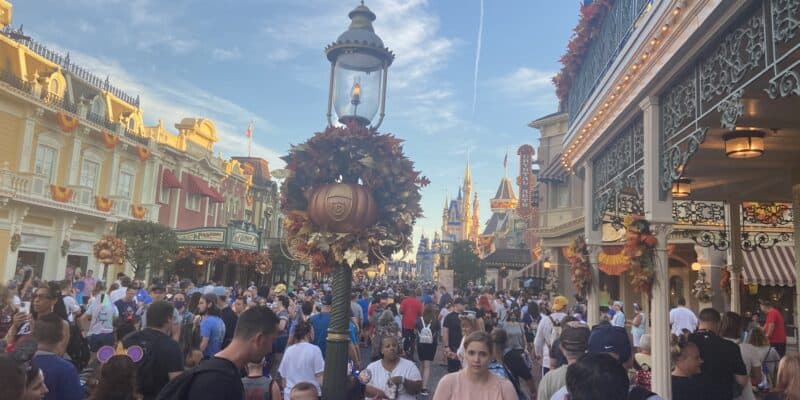 Inside the Magic is inside the Parks today for the celebrations and it is clear that other Disney World fans were excited for this day as well considering how crowded Magic Kingdom is!

The front of the theme park was flooded with Guests waiting to step foot inside Magic Kingdom for the start of the 50th anniversary. In the photos above, you can see that before Disney was actually letting people in the Park, the crowds looked like that very early this morning.

But later on, by around 7:30, actually getting through the gates took little to no time at all.

Main Street, U.S.A. almost instantly filled with happy Disney World fans of all ages as decorations were hung high. Guests couldn’t wait to get to Cinderella Castle in time for the 50th anniversary to officially kick off and the theme park to officially open.

The central hub, which is where a handful of the new “Fab 50” character statues can be found, was also filled with excited and happy Walt Disney World Guests, as seen in the images taken by Inside the Magic.

Be sure to stay tuned to Inside the Magic for all the celebrations today as we kick off Walt Disney World’s 50th anniversary celebrations.

If you are not able to visit the Parks today, don’t fear because Disney World will be celebrating the 50th anniversary for 18 months!

That’s right — this 18-month event will allow enough time for everyone to come and visit the Most Magical Place on Earth and check out the new experiences at all four Walt Disney World theme parks — including Magic Kingdom, EPCOT, Disney’s Animal Kingdom, and Disney’s Hollywood Studios. Guests will see shimmering EARidescent décor, new experiences, and more as Mickey Mouse, Minnie Mouse, and their friends host the celebration, alongside Walt Disney World Cast Members.