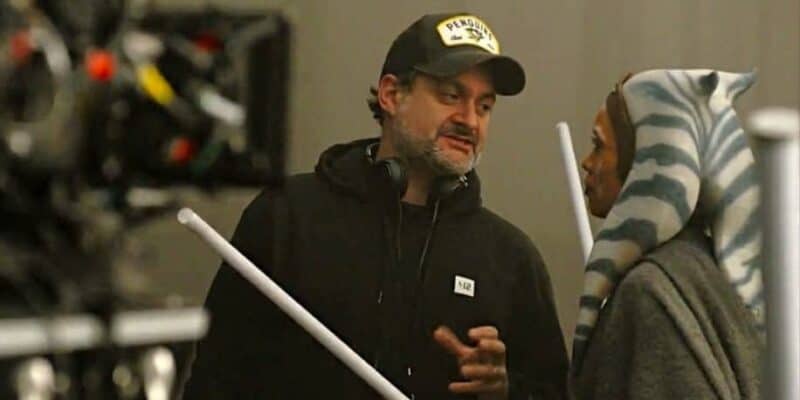 When Dave Filoni and George Lucas created their animated series, Star Wars: The Clone Wars, detailing the years when Anakin Skywalker had his own Padawan — a young female Togruta named Ahsoka Tano — they could not have known the impact that the show would have on the Star Wars fan community.

From skyrocketing Ashley Eckstein — the voice of Ahsoka for all seven seasons of the animated show — to stardom among Star Wars fans to spawning the #TanoTuesday hashtag, Clone Wars remains a fan-favorite even long after the series finale aired.

In recent years, the show’s storylines have been explored in Filoni and Jon Favreau’s live-action “Mando-Verse.”

Over the course of two seasons so far, Favreau and Filoni have taken fans on a wild journey across the Star Wars galaxy with characters both new and old. During the Season 2 finale episode, Luke Skywalker (CGI Mark Hamill) swooped in with his X-wing to rescue bounty hunter Din Djarin (Pedro Pascal), Grogu, Cara Dune (Gina Carano), Bo-Katan Kryze (Katee Sackhoff), Koska Reeves (Sasha Banks), and Fennec Shand (Ming-Na Wen) from certain doom at the hands of Moff Gideon (Giancarlo Esposito) and his Dark Trooper squadron onboard the Moff’s Imperial starship.

Then, many Mandalorian stars returned in spinoff series, The Book of Boba Fett, setting up the basis for the third season of the popular Star Wars show.

Filoni’s episode — “Chapter 6: From the Desert Comes a Stranger” — in particular, orchestrated the returns of Skywalker (CGI Mark Hamill/Graham Hamilton) — who officially interacted with his father’s Padawan, Ahsoka Tano (Rosario Dawson), for the first time — Grogu himself, and Marshal Cobb Vanth (Timothy Olyphant).

Now, the Lucasfilm Executive Creative Director has spoken out about upcoming spinoff series, Ahsoka, which is set to feature Tano’s hunt for fellow Jedi Ezra Bridger, who sacrificed himself to rid the galaxy of Grand Admiral Thrawn in the Star Wars Rebels series finale.

“Oh, it’s fantastic. I mean, it’s everything I could hope for. I never dreamed of [running a live-action series] as I was learning over the years. But to have a character that’s just come up over the years with a lot of fans as they’ve grown up and now she’s at the point where we can do this, it’s wonderful to be this same person guiding it across the different mediums, I think lends a consistency to the character that’s very uncommon.”

True to form, he stopped short of revealing actual details about the upcoming series, but did express that fans have a lot to look forward to, saying “it’s a really unique situation we’re in, but it’s awesome. There’s no other way to put it. The simple answer is just, ‘Yeah, it’s awesome.'”

Ahsoka does not have an official release date, but we do know it will feature Rosario Dawson reprising her role as Ahsoka Tano, Hayden Christensen as Anakin Skywalker, Natasha Liu Borddizzo as Sabine Wren. Mary Elizabeth Winstead, Ray Stevenson, and Ivanna Sakhno will also appear in unknown roles.

Disney+ subscribers can also watch for The Mandalorian Season 3 in February 2023.