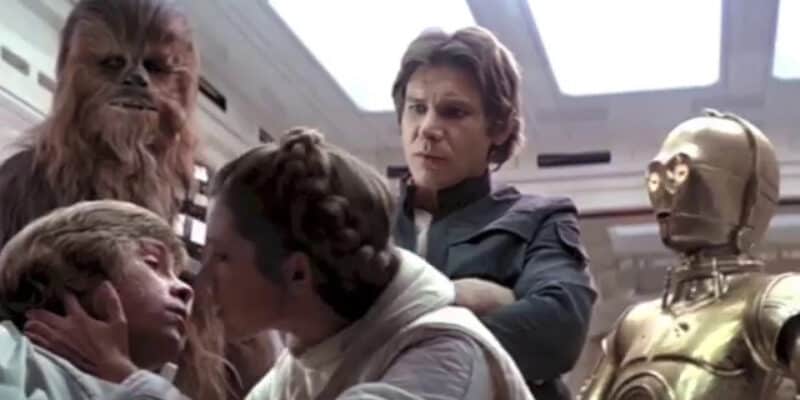 Over the years, there has been a great deal of debate about name pronunciations in the Star Wars fan community.

Among the biggest questions has been the proper pronunciation of “AT-AT” — the abbreviation of the All-Terrain Armored Transport vehicles used by Imperial ground forces. Some fans call the units “@-@,” while others say “A-T-A-T.” While AT-ATs have appeared in multiple Star Wars projects, they most famously showed up on Hoth’s Echo Base in Episode V – The Empire Strikes Back.

Now, Luke Skywalker actor Mark Hamill has weighed in, giving fans an answer once and for all.

It all started when StarWars.com Tweeted, “How do you pronounce AT-AT?” Tara Dublin re-Tweeted, saying, “This is a job for @MarkHamill”

The actor, who is famously active on social media, responded with:

Hamill then went on to say that Star Wars creator George Lucas himself didn’t really care how names were pronounced:

FYI: When we would ask George: “Is it Chew-bah-ka or Chew-back-a?” [for Chewbacca] / “Is it Lay-a or Lee-a?” [for Princess Leia] / “Is it Hahn or Han (as in hand)?” [for Han Solo]- he would just shrug & didn’t really care. He told us it would be pronounced in various ways in different parts of the galaxy. #TrueStory

FYI: When we would ask George: "Is it Chew-bah-ka or Chew-back-a?" / "Is it Lay-a or Lee-a?" / "Is it Hahn or Han (as in hand)?"- he would just shrug & didn't really care. He told us it would be pronounced in various ways in different parts of the galaxy. 🤨#TrueStory https://t.co/9dZ81vIxQw

It’s worth noting that Lucas often doesn’t seem to take the franchise as seriously as some fans — he also famously wanted the Millennium Falcon to resemble a hamburger.

Hamill was only 25 years old when he was cast in Lucas’s Star Wars: Episode IV – A New Hope (1977). At the time, he could never have imagined what the Star Wars franchise would become. Alongside Carrie Fisher (Princess Leia Organa) and Harrison Ford (Han Solo), Hamill skyrocketed to stardom, ultimately turning into a pop culture icon.

Then, Skywalker — by way of actor Graham Hamilton — returned again in Mandalorian spinoff, The Book of Boba Fett. Although the Jedi Master gave his young Padawan, Grogu, a choice and the child ultimately opted to return to his life with Djarin, it seems that Skywalker’s time in the “Mando-Verse” is far from over.

However, Hamill’s own future involvement in the Star Wars universe remains to be seen. While Luke Skywalker has defined his career — and it is unlikely he will ever leave Star Wars behind for good — the 70-year-old actor has several other projects in the works right now, including the upcoming Netflix adaptation of Edgar Allan Poe’s Fall of the House of Usher and TV movie Relatively Super.

Do you think pronunciation matters in Star Wars?