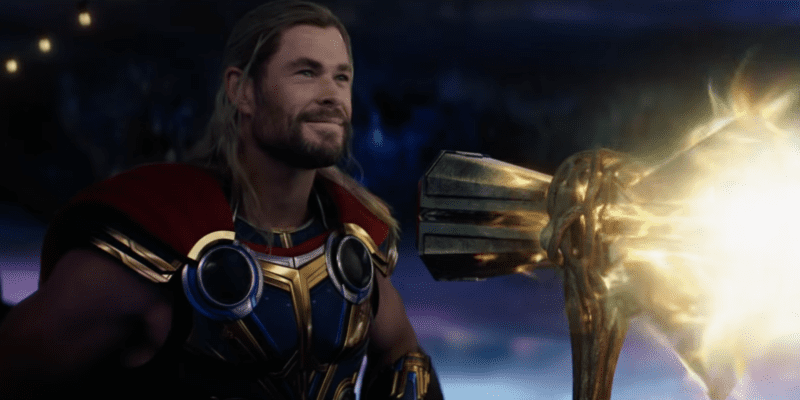 Recently, Marvel Studios’ latest outing, Thor: Love and Thunder — which hit theaters on July 8, 2022 — has been banned in multiple countries due to a few scenes that are culturally controversial in certain nations.

In China, for example, the film was banned from thousands of theaters due in part to Korg’s (Taika Waititi) revelation that the males of his alien race hold hands next to lava to create offspring. The Hollywood Reporter shared that this resulted in Thor 4 being banned for many of the same reasons as Pixar Animation Studios’ Lightyear (2022).

The theatrical release of blockbuster Marvel movie “Thor Love and Thunder” is not moving ahead in Malaysia. It had been scheduled for distribution from July 21, 2022…

…The latest, possibly indefinite, postponement was announced by the country’s two leading cinema operators GSC and TGV Cinemas on their social media feeds.

Despite these bans — and a divided Marvel fan base — MCU stars are rallying around Thor 4. Hawkeye villain Vincent D’Onofrio (Kingpin/Wilson Fisk) shared:

“This, this film right here. I love it.”

“As always, a spectacular night and another marvel [sic: Marvel] movie you have to go see.”

“Love & Thunder. Absolutely Bonkers, and that’s why I love it. Last night was everything. Still freaking out!!”

While there have been rumors that Chris Hemsworth will no longer play his Marvel Cinematic Universe role, Thor, after the release of his fourth solo outing, the actor himself has put those rumors to rest, even saying he intends to continue playing Thor until he is “kicked of the stage.”

“I love the experience, and I have from day one. Each time I’ve been asked back I’ve said ‘Absolutely let’s go.’ I’ve been lucky to have different directors and writers and cast to also inject different stories and energy into the films. Until the audience, the fans, the Marvel gods say, ‘No, we’ve had enough’ then I’ll keep showing up, I love it. It’s good fun.”

Despite fans’ somewhat chilly overall reception, Thor: Love and Thunder, directed by Taika Waititi (JoJo Rabbit, Boy, Free Guy), has received praise from critics — who say it has more of an emotional, “rom com” vibe than they were expecting — after early screenings. Love and Thunder will see the returns of numerous fan favorites from prior Thor movies, including Hemsworth, Natalie Portman (Jane Foster/Mighty Thor), and Tessa Thompson (Valkyrie).

What do you think about Marvel stars rallying around Thor: Love and Thunder as bans continue?