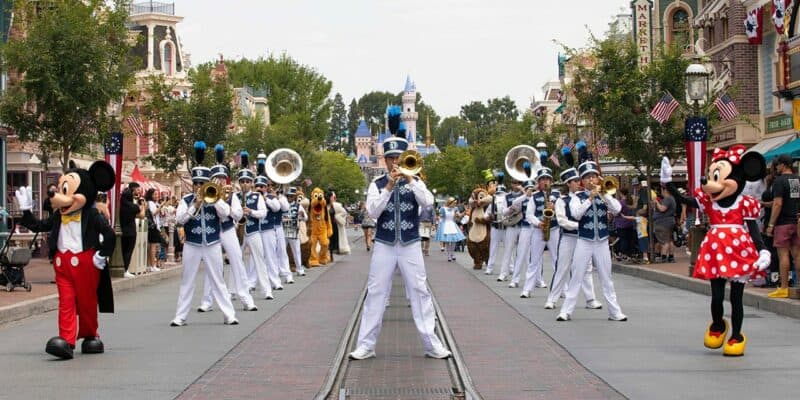 Meeting and interacting with their favorite Disney characters at Disneyland Resort is perhaps one of the most magical experiences a Guest can have. Being able to hug Mickey and Minnie Mouse, Goofy, Chip, Dale, Captain Jack Sparrow, The Incredibles, Chewbacca, Kylo Ren, Iron Man, Captain America, and many more is undoubtedly something that fills the young– and young at heart– with emotion and excitement.

However, sometimes the excitement is too much to handle for some, leading to some unpleasant and unfortunate situations.

Such was the case of a video posted on Instagram by Jessica’s View (@jessicasview_), in which a small kid nearly ruined a presentation of the Main Street Marching Band after running after Minnie Mouse and practically tackling her. Three Cast Members quickly rushed to handle the situation, and fortunately, Minnie was able to rejoin the performance. You can click here to watch the video.

While some viewers commented that the kid “just wanted to hug Minnie,” it is important to state that Guests should never interfere with a performance at any Disney Park, regardless of their age, as they could potentially cause an accident endangering themselves, Cast Members and other Guests.

Proof of this was a previous incident in which a kid ran into the parade route and let go of his balloon, which got caught on the leg of Merida’s horse, causing him to get spooked and act erratically. Fortunately, Cast Members were able to handle the situation preventing any injuries, but the experience was terrifying for Guests and Cast Members alike.

Disney Cast Members go through a series of training processes to provide Guests with the best experience while visiting the Park. This includes being trained to be as positive and friendly as possible to both the young and the young at heart. However, there is still a set of rules and regulations that Guests must comply with and Cast Members must enforce to keep Disneyland Park and all Disney Parks safe for Guests to enjoy.

Disneyland currently has so many entertainment offerings for Guests to enjoy! World of Color is currently performing at Disney California Adventure, and at Disneyland Park, Guests can enjoy the Main Street Electrical Parade and Disneyland Forever fireworks spectacular as they light up the night. Fantasmic! also returned on May 28th, and Guests can journey into imagination with Mickey Mouse at Rivers of America once again. Disneyland’s newest live show, The Tale of the Lion King, returned on May 28th but is currently unavailable due to Cast Members falling ill. Inside the Magic will report on any updates regarding this last show.

Disneyland Park is currently making significant improvements to several attractions, with Pirates of the Caribbean closed for refurbishment and Tarzan’s Treehouse waiting for a complete reimagining. Toontown is also gearing up for a massive change that will be revealed in 2023 with the reopening of the land and the debut of Mickey and Minnie’s Runaway Railway. However, there is still so much for Guests to enjoy! Walking up to Sleeping Beauty Castle is always a dream, especially when you get to go inside and relive the story of Aurora and Maleficent. Riding classics like “it’s a small world,” Mr. Toad’s Wild Ride, The Haunted Mansion, Matterhorn Bobsleds, Splash Mountain, and more will have you feeling the magic and craving a churro! Plus, now at Disneyland, Guests can enjoy Star Wars: Galaxy’s Edge for some blue milk or green milk and ride Rise of the Resistance and Smuggler’s Run.