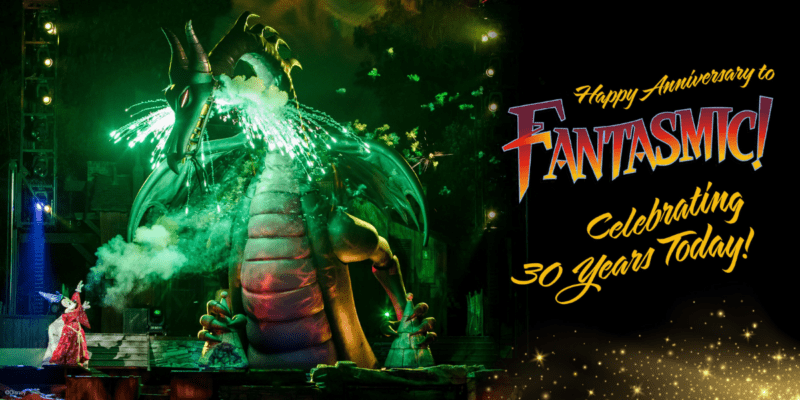 Fantasmic!, Disney’s longest-running nighttime spectacular, made its debut at Disneyland on May 13th, 1992. Today, Disney Parks (@DisneyParks) shared a tweet celebrating the 30th anniversary of this beloved show, which will make its way back into Disneyland’s Rivers of America on May 28th to delight the young and young at heart.

“Fantasmic!” is celebrating its 30th anniversary today! Disney’s longest-running nighttime spectacular returns to
@Disneyland on May 28, and we couldn’t be more excited!

“Fantasmic!” is celebrating its 30th anniversary today! 👏🏼 Disney’s longest-running nighttime spectacular returns to @Disneyland on May 28, and we couldn’t be more excited! 🌟 https://t.co/sKYJqYCg4M pic.twitter.com/PeezrwIhYa

“Fantasmic!” is an emotional extravaganza of colorful Disney-animated story scenes, choreographed to an exciting musical score. The waters of the Rivers of America come alive as Mickey Mouse dreams he is the Sorcerer’s Apprentice and faces dastardly villains, using the power of his imagination to save the day. Along the way, fantastic events and images as seen in stories like “Fantasia,” “The Jungle Book,” and more come to life with live performers, character appearances, enhanced special effects and pyrotechnics.

Of course, there have been several changes and updates made to Fantasmic! at Disneyland Park throughout the years, including digital projections and the spectacular 45-foot-tall fire-breathing Maleficent dragon, added in 2009. Even more magic was added in 2017 when new scenes and featured songs like “Friend Like Me” and “A Whole New World” from the Walt Disney Animation Studios classic Aladdin (1992).

Fantasmic! has delighted Guests with Disney magic with nearly 11,000 performances since its debut in 1992, and Guests can’t wait to experience this “journey beyond your wildest imagination” illuminating the waters of the Rivers of America when the nighttime spectacular returns on May 28th.

Fantasmic! will be joining other nighttime spectaculars that have already made their triumphant return to the Parks, World of Color at Disney California Adventure, plus the Main Street Electrical Parade and Disneyland Forever fireworks spectacular at Disneyland Park.

At Walt Disney World Resort, Guests are also excited to see Fantasmic! return to Disney’s Hollywood Studios, as the return of this nighttime spectacular was announced for 2022, though no official dates have been released.

However, Disney Parks Blog announced the show would come back with some changes, including all-new sequences featuring live performers, stunts, special effects, and more! At first, it was unclear to many where these new scenes would fit in new performances, but recently, it was released that this new sequence would replace the Pocahontas (1995) scene of the show. While Disney has not stated the official reason for this change, it can be assumed this decision was taken to make the show more adequate for younger audiences by celebrating inclusion and diversity, much like the newest float of the Main Street Electrical Parade.

Are you excited to see Fantasmic! once again on your next visit to Disneyland Park? Let us know in the comments below!