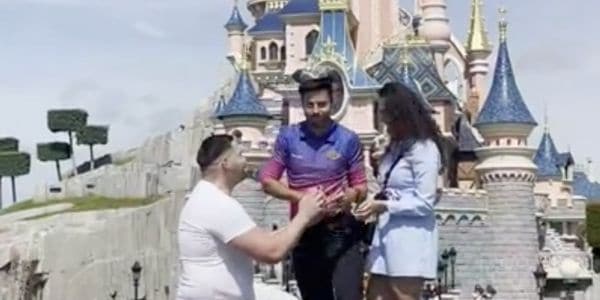 While the Disney Parks and Resorts are famous for their family-friendly attractions, rides, and entertainment, few are remembered for the beauty in the way that Disneyland Paris is.

A love letter from Disney and its team of incredible Imagineers, Disneyland Paris is truly a sight to behold. Everywhere you look gives you a picture-perfect place to capture memories and enjoy yourself. The Park arguably has one of the prettiest castles in the entire lineup of Disney Parks, as well as all of the beautifully-themed lands throughout.

This beauty, along with the romantic nature of the Resort may give some the idea to propose here, which is quite common in the Magic Kingdom at Walt Disney World back in Florida. However, it is important to remember to follow the rules.

A bizarre video was recently shared on social media, going viral incredibly quickly. The video shows a failed marriage proposal at the Disneyland Resort in Paris. See the video below shared by u/zR0B3ry2VAiH:

This takes the cake.. (Ring🤔) A Disney employee snatches a ring mid proposal

This takes the cake.. (Ring🤔) A Disney employee snatches a ring mid proposal from weddingshaming

As you can see in the video, the two Guests were sharing a very intimate moment on a stage in front of the beautiful Sleeping Beauty Castle in Disneyland Partis when a Cast Member came up to them and snatched the ring out of their hands. We assume this happened as the two Guests had not gotten permission to do this in this area.

The Cast Member took the ring and motioned for the Guests to leave the stage.

While this may have been a rather harsh and abrupt way to inform the Guest they were intruding, it is always important to follow the rules that Disney lays out in its Parks. For more on Disneyland Paris rules, click here.

Have you ever seen a proposal in the Disney Parks?