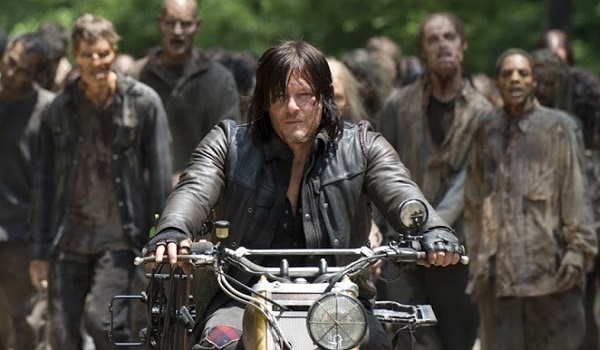 Norman Reedus really wants to be Ghost Rider in the Marvel Cinematic Universe.

The Walking Dead star has been teasing the fact he may enter the MCU as Ghost Rider. The last time fans saw Ghost Rider (Gabriel Luna) was in Agents of SHIELD Season 4, but most fans remember Nicholas Cage portraying the character in the two Sony movies, Ghost Rider (2007), and Ghost Rider: Spirit of Vengeance (2011).

The two Sony movies didn’t do well at the box office, and now the rights have reverted to Marvel Studios, similar to Daredevil. Fans have not been thrilled with Ghost Rider’s depiction so far, but have hope that Kevin Feige and Co. will do the character justice.

Now, with Marvel teasing the supernatural side of the Marvel Cinematic Universe — Moon Knight will include Khonshu, and depict more Egyptian mythology — while Mahershala Ali’s Blade will introduce the vampire hunter and vampires into the MCU.

Norman Reedus has been teasing his rumored role as Ghost Rider for the past couple of months, but the actor admitted to Inverse that he couldn’t give an answer if he has the role:

“I don’t know. Fingers crossed. I don’t know. There’s been a lot of talk over the last couple of years. I do not have an answer for you.”

The supernatural side of the MCU is new and unexplored with many villains. Mephisto — who famously never appeared in WandaVision — could also be introduced through Ghost Rider as the character is known to have sold his soul to the devil character.

Ghost Rider has never had a great relationship with Mephisto, so their dynamic could be a great way to introduce both characters.

Marvel has been building up their cosmic lineup with Thor: Love and Thunder (2022) bringing Natalie Portman back as Jane Foster/Thor and Guardians of the Galaxy: Vol. 3 introducing Adam Warlock with potentially other cosmic superheroes on the way. It seems that Marvel wants more heroes to work in groups so that way the MCU won’t just have the Avengers as the main superhero team, but have several such as the Young Avengers, Thunderbolts, Midnight Sons, Illuminati, and more. Only time will tell if any of these superhero teams form and become just as iconic as the Avengers (2012).

Norman Reedus has been busy with several projects and is going back to portray a fan-favorite character in the final season for the Emmy Award-winning series, The Walking Dead which has been going on for the last twelve years. On top of that, the actor has been working on the AMC reality series, Ride With Norman Reedus which has the actor travel to different destinations on a motorcycle. Many different people have become Ghost Rider in the comics, but Johnny Blaze was a stunt motorcycle driver. Reedus has already made it clear that he would love to be Ghost Rider and this motorcycle series seems to be his own audition for Marvel Studios.

Related: Ghost Rider Is ‘the New Daredevil’ as MCU Fans Beg For Return

Do you think Ghost Rider will appear in the MCU soon? Let us know in the comments below!