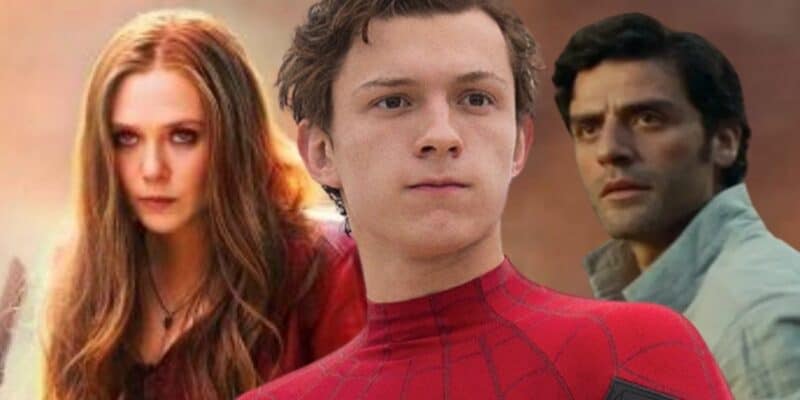 Marvel Studios’ next show to come to Disney+ will introduce Marc Spector/Steven Grant/Moon Knight (Oscar Isaac) to the Marvel Cinematic Universe. Marvel fans who have not read the Moon Knight comic books may not know what to expect, but Marvel Comics fans are waiting anxiously to see if the next Marvel original series will repeat the same mistakes that the MCU made with characters like Peter Parker/Spider-Man (Tom Holland) and Wanda Maximoff/Scarlet Witch (Elizabeth Olsen).

Marvel fans have had issues with the way some characters have been handled in the MCU for some time. Some complained about controversial changes made to their powers like Sam Wilson/Captain America – the superhero formerly known as the Falcon (Anthony Mackie) and the upcoming premiere of Kamala Khan/Ms. Marvel (Iman Vellani). But there have also been claims that Marvel Studios has been erasing the Jewish heritage of some of its biggest characters.

The main target for this controversy is the decision to cast Elizabeth Olsen as Wanda Maximoff, thereby whitewashing her and erasing her Romani heritage from Marvel Comics. Fans hoped that when WandaVision kicked off Marvel’s Phase Four plans and explored more of her backstory they would finally confirm she was at least Jewish in the MCU. But they let the opportunity pass.

Wanda Maximoff first appeared in X-Men #4 (1964) by Stan Lee and Jack Kirby. In Marvel Comics, Wanda and her brother Pietro Maximoff/Quicksilver (Aaron Taylor-Johnson) are the children of Holocaust survivor Magneto – depending on whether or not Marvel fans accept the terrible attempt to retcon this.

Some fans have pointed out that problematic director Joss Whedon made this even worse but not only erasing Wanda and Pietro’s Jewish heritage by changing their origin to make them work for HYDRA, a Nazi organization, in their MCU debut in Avengers: Age of Ultron (2017). Koushik7496 on Twitter summed up this point saying:

“Yup, because it’s marvel. Like fans ignore problematic **** like this because its marvel. They also ignored how they made the daughter of a Jewish supervillain into a Nazi.”

Yup, because it's marvel.
Like fans ignore problematic shit like this because its marvel.
They also ignored how they made the daughter of a Jewish supervillain into a Nazi.

Peter Parker is another character that fans point to when discussing the MCU’s erasure of the Jewish influence of the comics. Ever since he was introduced in Marvel Comics back in Amazing Fantasy #15 (1962) by Stan Lee he was coded as Jewish. It was later made canon in Non-Stop Spider-Man #4 by Joe Kelly and Chris Bachalo. However, every live-action version of Spider-Man seen in theaters never mentioned his heritage.

Of the three actors to bring the web-crawler to the big screen, Tom Holland, Andrew Garfield, and Tobey Maguire only Andrew Garfield is Jewish. Only Spider-Man: Into the Spider-Verse had a canonically Jewish Peter Parker.

How this relates to Moon Knight

For those unaware Marc Spector/Steven Grant/Moon Knight is the next Jewish character coming to MCU. He is the son of a rabbi and his heritage has played a large part in some of his biggest comic book runs since his first appearance in Werewolf by Night #32 (1975) by Doug Moench and Don Perlin.

In the MCU, he will be played by Oscar Isaac (Star Wars), who has Jewish heritage on his father’s side but was not raised in the Jewish faith. Oscar Isaac’s casting has caused a divide amongst Marvels with some taking issue with some pointing out he has played other Jewish characters like Mossad agent Peter Malkin in Operation Finale (2018). But others find no problem as despite his father being a rabbi, Marc Spector is actually an atheist. Milforgana admits to having conflicting thoughts on the casting saying:

Related: “We Made a Mistake, We Missed Some,” Marvel’s Mutants Prep For Battle

Kevin Feige and Marvel Studios have not confirmed whether Moon Knight will be Jewish in the MCU. After their track record fans are doubtful, considering neither head writer Jeremy Slater nor director Mohamed Diab are Jewish as Sersibarnez points out, saying:

“a reminder that moon knights jewish history is integral to the characters plot and development. oscar isaac has previously misrepresented jews and taken roles meant for jews. none of the writers are jewish.”

a reminder that moon knights jewish history is integral to the characters plot and development. oscar isaac has previously misrepresented jews and taken roles meant for jews. none of the writers are jewish.

Related: Marvel Says ‘No Way Home’s Big Death Was Not Supposed to Happen Like That

For some fans, the frustration has reached a breaking point as the Marvel Universe seems to ignore Jewish characters whenever it gets the chance. This is particularly problematic as the comics that the Marvel movies are based on were created by Jewish people like Stan Lee and Steve Ditko.

“Cast a dang Jew as Moon Knight, we have like 6 Marvel characters and Jews have played exactly zero of them.”

Cast a dang Jew as Moon Knight, we have like 6 Marvel characters and Jews have played exactly zero of them.

There is another major Jewish character set to appear later in Marvel’s Phase Four – Ben Grimm/The Thing of The Fantastic Four and with Marvel making strides in increasing the diversity of their characters and actors, fans could soon reach their final straw with the way the MCU handles Jewish characters.

Moon Knight is a complex superhero, who is a lot more than his Jewish heritage. He deals with Dissociative Identity Disorder while serving as the fist of Khonshu. Marvel describes the series as:

It will premiere on March 30, 2022, and co-star Ethan Hawke and May Calamawy. Tom Holland’s future in the MCU is not certain but Elizabeth Olsen will return as Wanda Maximoff in Doctor Strange in the Multiverse of Madness (May 6, 2022).

Let us know in the comments if you think Marvel Studios should confirm that Moon Knight is Jewish in the MCU.