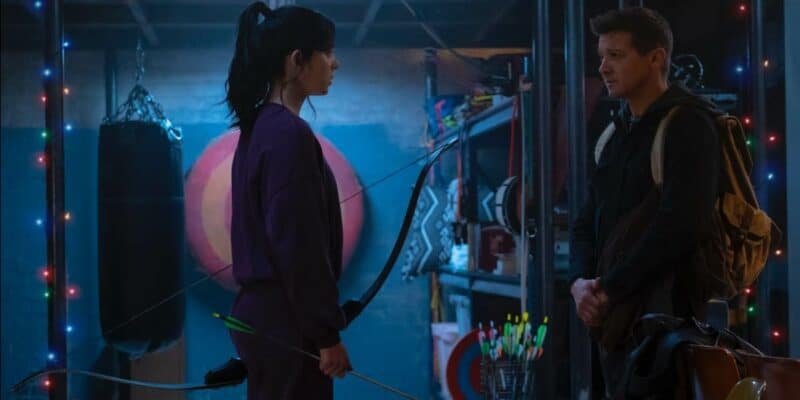 Marvel Studios’ latest original series Hawkeye just dropped the first two episodes onto Disney+. And while many Marvel fans are glad that they are finally getting more of Clint Barton AKA Hawkeye (Jeremy Renner), others have a problem with some of the way that the show has been marketed. Particularly, the focus on it being a Christmas series.

For those not in the know, the new Hawkeye series will follow the Avenger’s marksman and his biggest fan Kate Bishop (Hailee Steinfeld) as the two archers unravel a mystery at Christmas time in New York City.

The series will be heavily based on the critically acclaimed Hawkeye comic book by Matt Fraction and David Aja – who is currently in his own battle with Marvel Studios utilizing his iconic art in promotion of the Hawkeye series.

Their run on Hawkeye was set in winter but did not feature any of the Christmas imagery that has been seen in the Hawkeye series. And this has left some fans feeling put off by the introduction of a religious holiday.

One user on TikTok Danielle Silverstone shared why she felt that the Christmas marketing was inappropriate. Danielle says:

“It being a Hawkeye thing that happens to happen at Christmas is one thing, but they are literally marketing it as Christmas show […] so they are already alienating anyone who does not celebrate Christmas just by the marketing.”

She goes on to share some of how some of the most famous comic book characters were created by Jewish artists like Stan Lee, Jack Kirby, and Joe Simon. The comics that they created in the early days of comics books reflected their life experiences and how they saw the world as Jews. For example, Captain America/Steve Rogers got his start punching Hitler almost a year before America began fighting in World War II.

The Marvel Cinematic Universe has previously come under fire for erasing the Jewish heritage of characters that have been used. One, in particular, is Wanda Maximoff aka Scarlet Witch (Elizabeth Olsen). In Marvel Comics, Wanda is the daughter of a Holocaust survivor, Eric Lensher/Magneto. Not only is her Jewish heritage never mentioned, in Captain America: Civil War (2016) a cross necklace is seen in her room in Avengers Tower.

The heavy Christmas imagery in the marketing of the Hawkeye series is juxtaposed by the fact that in the first episode it is implied that Kate Bishop, who is played by a Jewish actress, is Jewish in the MCU. Kate and Clint show up at Kate’s aunt’s house where a Mezuzah and a Menorah are seen. Those combined are some of the only indications of Jewish culture in the MCU thus far.

And while Clint Barton may be Christian in the MCU, the problem fans have is that Marvel Studios seems to have had no problem adding Christian religious elements in this series while erasing Jewish elements elsewhere.

Let us know in the comments if you think the MCU is lacking Jewish representation.