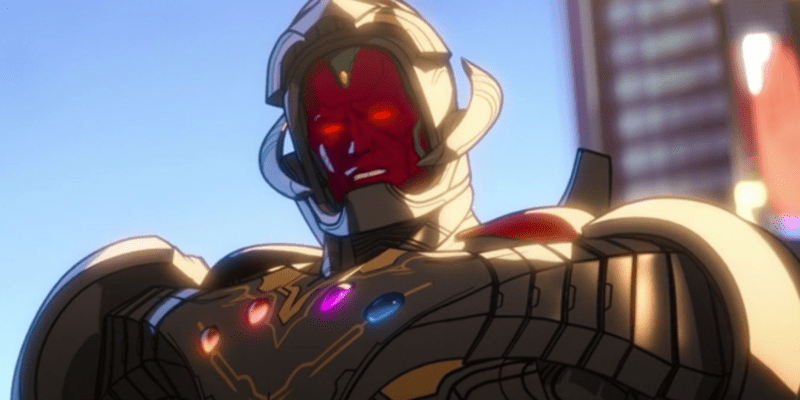 Who is Ultron in the Marvel Cinematic Universe? The devastatingly advanced artificial intelligence — first unwittingly unleashed by Tony Stark (Robert Downey Jr.) and Bruce Banner (Mark Ruffalo) in Avengers: Age of Ultron (2015) — has loomed large in the Marvel Cinematic Universe ever since. While Ultron’s plan to destroy humanity was thwarted by the Avengers, resulting in his destruction, the ripple effects of his influence continue to appear in more recent MCU projects — like WandaVision and What If…?.

Learn the history and powers of the different versions of Ultron in the Marvel Cinematic Universe.

History of Ultron in the Marvel Cinematic Universe

What is Ultron’s origin in the Marvel Cinematic Universe?

Avengers: Age of Ultron (2015) introduced audiences to the notion of the Ultron Program. Tony Stark (Robert Downey Jr.) had conceived of the Ultron Program in response to the Battle of New York depicted in the climax of Avengers (2012). Astonished by how woefully unprepared the forces of Earth were for the Chitauri invasion led by Loki and masterminded by Thanos, Tony Stark wanted to put “… a suit of armor around the world.” Believing his Iron Man hardware and Stark tech artificial intelligence to be the key — Stark sought to develop a global peacekeeping force capable of replacing the Avengers. “Peace in our time,” as the genius, billionaire, playboy, philanthropist put it.

Teaming with fellow science bro Bruce Banner (Mark Ruffalo), Stark created an artificial intelligence inspired by Loki’s Scepter. The Scepter was revealed to house an Infinity Stone — the Mind Stone — explaining how Loki could use it to enthrall others in Avengers. Stark and Banner determined that the matrix of the Mind Stone, similar to the neurons of a human brain, could supercharge his J.A.R.V.I.S. artificial intelligence. Stark intended to place the new A.I. into his Iron Legion drones.

The Scepter’s Mind Stone code is integrated into the Ultron Program, and the artificial intelligence became wholly self-aware. Capable of accessing and manipulating the internet instantly, the sentient Ultron (James Spader) — immediately decided that the Avengers were poor peacekeepers compared to him and that humanity itself deserved extinction in favor of superior beings made in Ultron’s image.

Once Ultron became self-aware, he resented the Avengers — Iron Man (Robert Downey Jr.), Hulk (Mark Ruffalo), Thor (Chris Hemsworth), Captain America (Chris Evans), Hawkeye (Jeremy Renner), and Black Widow (Scarlett Johannson).  He deduced that they were violent hypocrites and symptoms of a larger problem with humanity. Ultron concluded that humans must be forced to evolve into more civilized beings or else face extinction.

Ultron’s plan for his own evolution was to insert his consciousness into an android body to achieve his final perfect form. That plan was thwarted when the Avengers stole the Regeneration Cradle, using it and the Mind Stone to create the Synthezoid Vision (Paul Bettany).

Ultron’s big picture design was to cause an extinction-level event that would reboot evolution on Earth. Using stolen vibranium, Ultron created the Doomsday Trigger — a massive device intended to lift a landmass from Novi Grad, Sokovia into the Earth’s atmosphere, then drop it. The landmass plummeting to Earth was meant to cause an effect similar to the meteor that caused the extinction of the dinosaurs.

Related: Marvel’s Avengers Drops NEW Spider-Man Trailer (But, It’s Not THAT One)

What are Ultron’s goals in Marvel’s What If…? series?

In Marvel’s Disney+ series What If…?, Ultron creates the “Vision” android body he desires as his ultimate form. The episode — What If… Ultron Won? — Ultron wields the god-like powers of the Mind Stone with his army of Ultron Sentries behind him. This version of Ultron is able to kill Iron Man (Mick Wingert), Captain America (Josh Keaton), Hulk (Mark Ruffalo), and Thor (Chris Hemsworth) and set off a global nuclear disaster that brought humanity to the brink of extinction.

Related: The Genius of Hank Pym in the Marvel Cinematic Universe

Realizing his goal of effectively eliminating organic life on Earth, Ultron sets his sights on the rest of the universe when he comes into possession of the Infinity Gauntlet — adding all the other Infinity Stones to his Mind Stone. This gives him nearly limitless power that allows him to perceive The Watcher (Jeffery Wright) and the existence of the Multiverse. As Ultron battles The Watcher through myriad timelines and universes, he decides to remake all of the Multiverse in his image.

Strengths and weaknesses of Ultron in the Marvel Cinematic Universe

What are Ultron’s powers in Avengers: Age of Ultron?

As a technologically advanced machine powered by the most powerful artificial intelligence in the Marvel Cinematic Universe, Ultron demonstrated an ability to evolve his powers and abilities throughout Age of Ultron. Initially, audiences are introduced to Ultron as an AI transferred into an Iron Legion Sentinal drone, giving him the advanced speed, strength, and durability on par with some of Iron Man’s suits.

Later in the film, Ultron infiltrates the HYDRA research base. Taking advantage of the robotics developed using Loki’s Scepter — housing one of the six Infinity Stones, the Mind Stone — Ultron used the technology to create his army of Ultron Sentries and upgrade his own body. One major ability he added was a form of telekinesis powered by Chitauri technology — recovered from the Chitauri invasion at the Battle of New York in Avengers (2012). This ability allowed Ultron to manipulate gravitational fields, pulling and pushing objects and opponents at will and enhancing his flight capabilities.

What are Ultron’s powers in Marvel’s What If…? series?

In the penultimate episode of What If…? Season one — What If… Ultron Won? — Ultron has succeeded in securing his vibranium-enhanced Synthezoid “Vision” body as his ultimate form — including the powerful Infinity Stone, the Mind Stone. In this alternate timeline, his enhanced form enables him to bypass J.A.R.V.I.S. in U.S. government computers, and he launches a nuclear attack that brings humanity to the brink of extinction.

Ultron had destroyed the Avengers, leaving him with no opposition on Earth. Thanos (Josh Brolin) arrives with 5 of the 6 Infinity Stones in his Infinity Gauntlet and an eye to capture Ultron’s Mind Stone. Thanos is quickly — and maybe a little too easily — dispatched by a beam from the Mind Stone that slices Thanos in half.

Ultron then takes control of the full Infinity Gauntlet, giving him near omnipotence. The remaining Infinity Stones — Soul Stone, Power Stone, Space Stone, Time Stone, and Reality Stone — give Ultron vast reality-altering abilities. Ultron soon realizes that his incredible power allows him to perceive The Watcher and the existence of the Multiverse.

How is Ultron defeated by the Avengers?

Ultimately, the Age of Ultron was prevented by the Avengers. Captain America (Chris Evans), Wanda Maximoff (Elizabeth Olsen), and Pietro Maximoff (Aaron Taylor-Johnson) evacuated nearly all Sokovian residents as Novi Grad was lifted into the air and battled it out with Ultron Sentries.

Iron Man (Robert Downey Jr.) and Thor (Chris Hemsworth) destroyed the Sokovian meteor before it could re-enter the atmosphere and impact the Earth.

Hulk (Mark Ruffalo) and Black Widow (Scarlett Johansson) inflicted a devastating amount of damage on Ultron’s body. As he attempts to flee in the Avenger’s Quinjet, he kills Pietro. Hulk leaps aboard the aircraft as it soars away and hurls him out.

Ultron (James Spader) crash lands near Wanda Maximoff, grieving at the loss of her brother, who puts down Ultimate Ultron. With one last-ditch effort at survival, Ultron puts his consciousness into the last remaining Ultron Sentry. Vision (Paul Bettany) confronts him and — using the power of the Mind Stone — destroys Ultron once and for all.

How is Ultron defeated by the Guardians of the Multiverse?

With a goal to end organic life throughout the universe, the last surviving Avengers on Earth continue to search for a way to destroy Ultron — Hawkeye (Jeremy Renner) and Black Widow (Lake Bell). They retrieved a HYDRA artificial intelligence patterned after World War II-era HYRDRA mastermind Arnim Zola (Toby Jones).

Related: The Ultimate Guide to Marvel’s ‘What If…?’

However, this was not the end for the Ultron-Vision hybrid. He was far out of range of his Earth-bound Sentries as he battled The Watcher throughout the Multiverse.

Doctor Strange Supreme was able to guard the rest of the Guardians by casting a potent protection spell — giving the Guardians added durability in the face of Ultron’s use of the Infinity Stones. Ultimately, Captain Carter was able to remove Ultron’s helmet just long enough for Black Widow to fire an arrow containing the digital form of Zola into Ultron’s eye. Zola overwhelmed Ultron’s programming and shut him down for good.

Who actually voices Ultron in the Marvel Cinematic Universe?

Who voices Ultron in Avengers: Age of Ultron?

Actor James Spader voices Ultron in Age of Ultron. The role was a reunion of sorts for Spader and Robert Downey Jr., who worked together on Less Than Zero, the 1987 classic coming-of-age film. Ultron’s personality was derived from his creator, Tony Stark, so Spader’s wit and sarcasm are meant to mirror that of Downey Jr. as Stark.

Who voices Ultron in Marvel’s What If…? series?

Ross Marquand took over for James Spader, voicing Ultron in What If…? Episode 8, “What If… Ultron Won?” and again in Episode 9, “What If… The Watcher Broke His Oath?”. Marquand also voiced the character for “Avenger’s Damage Control” — a virtual reality video game featuring Avengers cast like Paul Rudd as Ant-Man, and Benedict Cumberbatch as Doctor Strange.

How is Ultron in the MCU different from Ultron in Marvel Comics?

Also, while in Age of Ultron, the Ultron Program is conceived as a peacekeeping mission — a tool for protecting humanity that could potentially replace the Avengers — the comics do not include this motivation as part of Ultron’s origin. Like many comic book villains of the time, Ultron was presented as a powerful and villainous foil to the Avengers without much thought given to character development. It wasn’t until latter-day depictions of Ultron — beginning with 2010’s Avengers: Earth’s Mightiest Heroes cartoon — that audiences were introduced to the philosophical details of Ultron’s psyche.

What powers does Ultron have in Marvel Comics?

Marvel fans have noted that the Ultron in Avengers: Age of Ultron was significantly depowered from the Marvel Comics version. In the comics, Ultron is depicted as a near-invincible super-robot who can fly and control human minds. He also possesses super strength and any number of sophisticated high-tech weaponry, not to mention his endless army of Ultron Sentries.

This decision to scale down Ultron’s powers for the Marvel Cinematic Universe was an intentional choice by Avengers 2 writer and director Joss Whedon. Speaking to EW in 2015, Whedon said:

“I knew right away what I wanted to do with him. He’s always trying to destroy the Avengers… he’s got a bee in his bonnet. He’s not a happy guy, which means he’s an interesting guy. He’s got pain. And the way that manifests is not going to be standard robot stuff. So we’ll take away some of those powers because at some point everybody becomes magic, and I already have someone who’s a witch.”

It remains to be seen if Ultron from the Sacred Timeline or Ultron from the What If…? Multiverse will re-emerge to continue impacting the Marvel Cinematic Universe in Phase Four and beyond. However, with Ultron’s track record of always coming back to haunt the Avengers in the pages of Marvel Comics, it’d be unwise to count out Ultron.

Where does Ultron rank among the best of the worst villains in the MCU? Let us know in the comments, MCU fan!