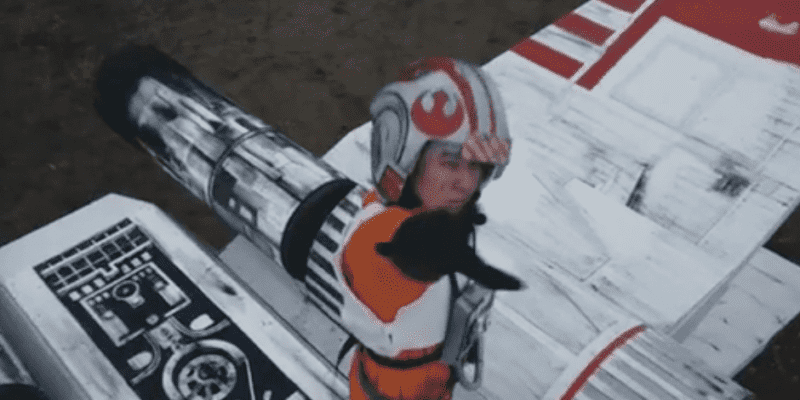 Last year, while The Mandalorian Season 2 was airing, some Star Wars fans from Siberia found themselves inspired by bounty hunter Din Djarin (Pedro Pascal) and his tiny charge Grogu (AKA “Baby Yoda”). The group constructed an impressive life-size version of Djarin’s transport, the Razor Crest [below].

Tragically, much like the demise of the actual Razor Crest — which was destroyed in The Mandalorian Season 2, Episode 6 (“Chapter 14: The Tragedy”) by a single strike from Moff Gideon’s (Giancarlo Esposito) Imperial cruiser during the Battle of Tython — the 50-foot fan-made version also met its end, in this case as collateral damage during a severe storm.

Undeterred by the destruction of their Mandalorian project, however, the group of Russian Star Wars fans is at it again — this time they’ve constructed a life-size X-wing.

On Instagram (@just.ayaal), the engineers have shared details about their finished starship. Translated into English, the caption on the following video reads:

We finished building the ship.
The creation of the ship took us all summer, a lot of effort and money was spent.
Pay attention to the detailing of the ship, it turned out very cool, what do you think? That’s not all, we will soon finish the R2-D2 and C3PO droids. It will be the coolest cosplay in the world!

Support us with reposts! We hope our work is seen by as many people as possible! Leave your comments, the author of the most creative one will receive a stormtrooper helmet!

Throughout the summer, the group shared numerous updates about their X-wing progress, including the following post in which they finally began putting all the pieces of the Star Wars ship together outdoors:

Our team has been working on the creation of this ship for 3 months!

For most fans of a galaxy far, far away, the Rebel Alliance X-wing starfighter helps to define the Star Wars franchise. The Star Wars X-wing is an iconic starship model, flown by the likes of Jedi Knight Luke Skywalker (Mark Hamill) in the original trilogy, Poe Dameron (Oscar Isaac) in the sequel trilogy — and even, briefly, R2-D2.

Speaking of the fan-favorite Astromech droid, the Russian team has also given a glimpse of their life-size version of the unit:

The Star Wars universe cemented itself as a part of pop culture with the release of Star Wars: Episode IV – A New Hope (1977). Since then, the Star Wars universe has expanded to include all nine Skywalker Saga films — the original trilogy, prequel trilogy, and sequel trilogy — standalone movies like Disney’s Rogue One: A Star Wars Story (2016) and Solo: A Star Wars Story (2018), and countless novelizations, Marvel comic books, and television series, including Star Wars: The Clone Wars, Star Wars Rebels, Star Wars: The Bad Batch, and, of course, The Mandalorian.

What do you think about this life-size X-wing?