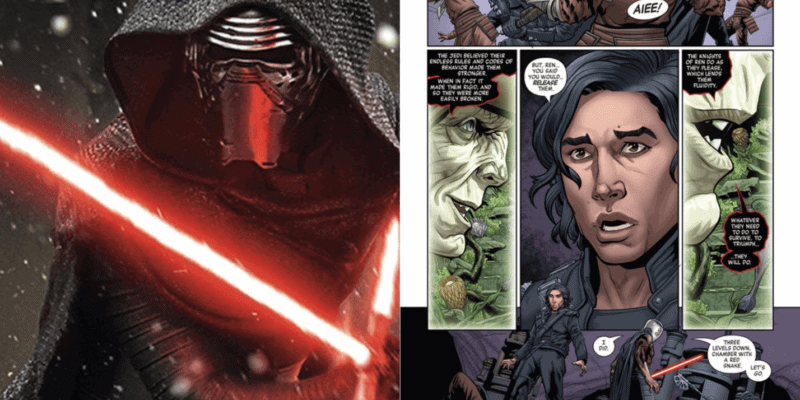 While much recent Star Wars online discussion has centered around Rey’s lightsaber, Ren’s unique blade is still a favorite fan topic. Since Kylo Ren’s red lightsaber made its first appearance in Star Wars: Episode VII – The Force Awakens, fans have speculated about the origin of his distinctive blade.

Now, Star Wars has revealed how Kylo Ren’s lightsaber came to be in the prequel comic miniseries, The Rise of Kylo Ren. The canon Star Wars series, written by Charles Soule and illustrated by Will Sliney, explores the backstory of both Ren himself and the Knights of Ren.

Issue 1 of the Star Wars: The Rise of Kylo Ren series begins with Ben Solo departing from the Jedi Temple where he was training under Luke Skywalker. The backstory continues with the tale of how Solo fell in line with Supreme Leader Snoke and ultimately became Kylo Ren, leader of the Knights of Ren.

The Star Wars comics also reveal that Ren’s crossguard lightsaber was the same one he built during his Jedi training. The blade was originally blue.

After he chose Snoke and the dark side, Ben tried to make his lightsaber’s kyber crystal bleed. This is the process every Sith Lord had to go through in order to create the iconic red lightsaber blade.

Ben, however, not only bled his lightsaber crystal, but cracked it. He attempted to reinstall the crystal, but the intense energy from the broken crystal resulted in a short. The dark side’s newest convert then installed the crossguard, which allowed the excess kyber energy an escape through the sides of the hilt.

Once this was done, Ben Solo fully became Kylo Ren.

What’s next in the Star Wars universe?

Now that the Skywalker Saga has ended with Star Wars: Episode IX – The Rise of Skywalker, fans of the franchise don’t have a new movie to look forward to until 2022. That doesn’t mean there aren’t plenty of things going on in the Star Wars world, though.

The Disney+ streaming platform, in particular, will be rife with new Star Wars content over the course of the next year or so. Season 2 of The Mandalorian will debut in October 2020 and a third season of the hit series has already begun development.

What do you think about the Kylo Ren lightsaber origin story?