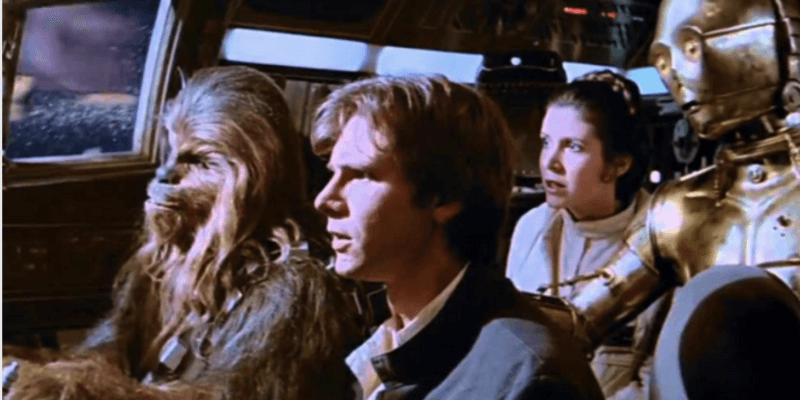 **SPOILERS Ahead For The Bad Batch Episode 3**

If there’s one thing we love about the Star Wars universe that Jon Favreau and Dave Filoni are creating on Disney+, it’s the subtle nods to the original trilogy — these are incredibly fun for longtime Star Wars fans, but don’t distract from the story that is currently being told.

The perfect example? Jedi Knight Luke Skywalker (Mark Hamill) showing up in The Mandalorian Season 2 finale episode. Since Din Djarin (Pedro Pascal) didn’t know who Skywalker was, the scene still made sense for new fans, while still exhilarating those who have followed the Star Wars universe since George Lucas created it in the 1970s.

Now, Filoni has done it again. In the latest episode of his new animated series, Star Wars: The Bad Batch, Filoni and his team — including head writer Jennifer Corbett and director Brad Rau — paid the perfect tribute to Star Wars: Episode V – The Empire Strikes Back (1980).

In Episode 3 (“Replacements”), we see Clone Force 99 make a desperate crash landing on a desolate moon. This immediately recalls the Empire Strikes Back scene in which Han Solo (Harrison Ford) hides the Millennium Falcon in an asteroid cave that winds up being the mouth of an exogorth — a massive space slug. Yes, it’s as pleasant as it sounds.

As Den of Geek pointed out:

The Bad Batch’s ship coming down into heavy fog on the moon even looks like the scene where the Falcon flies deeper into the belly of the beast (literally). In both cases, there’s not enough air to breathe, so the characters don breath masks, seen also in the Prequel and Sequel Trilogies.

This Bad Batch episode continues paying homage to Empire Strikes Back when Omega encounters an Ordo Moon Dragon while trying to complete Clone Force 99’s mission. The dragon feeds on raw electricity, just the mynocks in the aforementioned ESB sequence. And, as Den of Geek noted:

It also pops up at Omega on the other side of the viewport for a jump scare reminiscent of how the mynocks scared Leia in Empire.

This subtle tribute to the fan-favorite Star Wars movie is the perfect addition to Filoni’s latest animated endeavor, which picked up during Emperor Palpatine’s execution of Order 66, immediately after Star Wars: The Clone Wars ended.

As The Bad Batch moves forward and we continue watching the adventures of Hunter, Wrecker, Echo, Tech, Omega — and new Imperial officer Crosshair — we are sure to see more nods to the original trilogy.

The official description of The Empire Strikes Back reads:

The Bad Batch is described as:

Clone Force 99, also known as the Bad Batch—a group of elite clone troopers with genetic mutations that were first introduced in Star Wars: The Clone Wars—take on daring mercenary missions in the aftermath of the Clone Wars.

The series stars Dee Bradley Baker as every clone trooper, Michelle Ang as Omega, and Stephen Stanton as Wilhuff Tarkin.

Are you excited for more Bad Batch Easter eggs?
Currently, fans can watch the first season and second season of The Mandalorian and Disney Gallery: The Mandalorian streaming on Disney+. New episodes of Star Wars: The Bad Batch drop every Friday on the streaming platform. Mandalorian showrunner Jon Favreau and executive producer Dave Filoni are working on four new series — The Mandalorian Season 3, Ahsoka, Rangers of the New Republic, and The Book of Boba Fett.