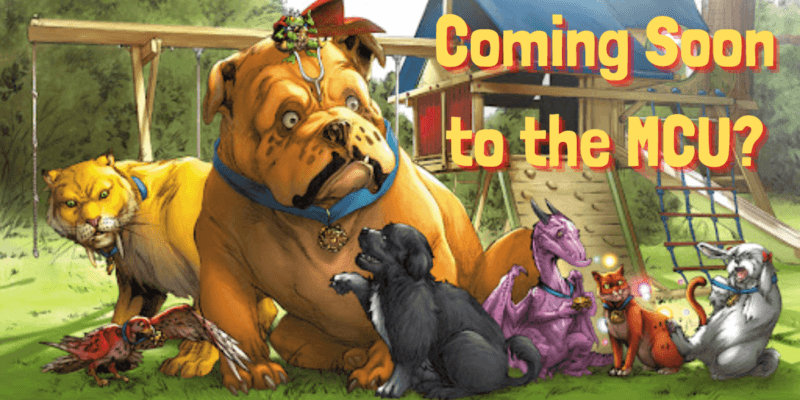 Marvel’s Loki series marks the third entry in the MCU’s new television programming on Disney+, after WandaVision and The Falcon and the Winter Soldier. And, the mercurial villain’s streaming debut has certainly changed the game for the Marvel Cinematic Universe as fans have come to know it. The Marvel Multiverse is here in a big way. And this opens the door for one of Marvel Comics’ craziest teams – The Pet Avengers!

Marvel Studios boss Kevin Feige may have revealed a huge part of his MCU Phase 4 plans, but there are just many new Marvel films that haven’t been announced. We still do not know what the next Avengers movie will bring Earth’s Mightiest Heroes back together – Secret Wars perhaps?

It’s possibly the worst kept secret that the Young Avengers are coming. We met Cassie Lang AKA Stature back in Ant-Man (2015) as played by Abby Ryder Fortson, but she was recast with an older version played by Kathryn Newton in Ant-Man and the Wasp: Quantumania (February 17, 2023).

So now that the Marvel Multiverse is in full swing there is no limit to the crazy ideas from the comic books that that can bring to the MCU.

One needs to look no further than the next Marvel project set to hit Disney+ on August 11 – What if…? to see that there are no longer any limits on what the MCU can do. We’ll be getting versions of characters like Peggy Carter (Hayley Atwell) as a super-soldier, T’Challa (Chadwick Boseman) as Star-Lord, and even Marvel Zombies.

Marvel Studios has been planning an in-house animation branch. And, their next project after What If…? has not been announced. So why not introduce a beloved team from Marvel Comics like the Pet Avengers?

Who Are Marvel’s Pet Avengers?

Keep in mind that they are not to be confused with the Animal Avengers, which is a team from an alternate reality where the Avengers are animals. This includes characters made famous from Spider-Man: Into the Spider-Verse (2018) like Peter Porker AKA Spider-Ham voiced by John Mulaney. The Animal Avengers also include Steven Mouser AKA Captain Americat, the feline Captain America, Tony Stark as the Iron Mouse. Seriously, they’re super cute.

The Pet Avengers, in contrast, is a team of animal sidekicks. They joined forces after to stop Thanos from collecting the Infinity Stones (called Infinity Gems in the comics). They even battled the actual Avengers in a mini-series called Avengers vs Pet Avengers (2010). So they are definitely heroes in their own right.

Related: Every Version of Spider-Man That Marvel Fans Should Know

We Have Already Met Some Pet Avengers

The Pet Avengers original comic book lineup actually includes some characters we have already seen in the MCU. The Loki series featured a brief cameo of Throg or Frog Thor. The Easter egg was supposed to include a scene where he was voiced by Chris Hemsworth, but it was ultimately cut.

Frog Thor and Throg are different characters. Frog Thor is Thor turned into a frog by the God of Mischief and Throg is a man named Simon Walterson who was also turned into a frog who gained the powers of Thor. It’s Throg who is a card-carrying member of the Pet Avengers. Simon Walterson who also went by Puddlegulp wields a sliver of Thor’s hammer Mjolnir that he called Frogjolnir.

Another Pet Avenger who has made his way to the MCU is Redwing, though he did it as a robotic drone that helps Sam Wilson aka Falcon aka Captain America (Anthony Mackie). The current version of the Redwing in the MCU may not be Sam Wilson’s pet but who knows if there is a version of him in an alternate timeline where he is still an actual falcon and Sam can talk to birds like he can in Marvel Comics.

The Leader Of The Pet Avengers Deserves Redemption

Marvel fans almost got Lockjaw, the leader of the Pet Avengers, in the MCU canon. He was introduced in that one show, that one that no one talks about and all Marvel fans pretend never happened. I am of course referring to the much-hated Marvel’s The Inhumans. While the series was conceived as part of the Marvel Cinematic Universe gratefully it has been shuffled to the Marvel Legacy section of Disney+.

Lockjaw is an Inhuman dog with the power to teleport. After coming into contact with the Mind Stone he gained the ability to communicate telepathically with the rest of the Pet Avengers. Luckily, Marvel may get a second chance to adapt the super dog in the upcoming Ms. Marvel series staring Iman Vellani as the Inhuman hero Kamala Khan aka Ms. Marvel.

Ms. Marvel has not confirmed if it will include her Inhuman backstory after the Inhumans television show failed so spectacularly. The Inhumans have served as a sort of alternate version of the X-Men and the group was later redeemed in a successful arc on Agents of SHIELD – which is also no longer considered official canon.

What Other Pet Avengers Could Be Hiding in the MCU?

Did anyone expect me not to mention Alligator Loki? The variant of Tom Hiddleston’s Loki has taken the internet by storm. Marvel fans have written him a backstory and a snappy theme song. They clearly want more of the variant of the trickster god and he could show up as a villain for the rest of the Pet Avengers or get redeemed as a hero like the variant of the Frost Giant Prince from Loki.

It’s going to be a long time until Marvel can work in a character like Lockheed, the alien dragon companion of the X-Men Kitty Pryde aka Shadowcat. Luckily, alien dragons could be coming to the MCU in the upcoming Shang-Chi and the Legend of the Ten Rings (September 3, 2021). Alligator Loki could fill the reptile role for the Pet Avengers while we wait for the X-Men to make their MCU debut.

Goose the flerken was introduced in Captain Marvel (2018) and he stole our hearts and Nick Fury’s (Samuel L. Jackson) eye. While his comic book counterpart — Chewbacca — was not a Pet Avenger, there is a cat on the team. The Pet Avengers have a cat named Hairball, who gained super-speed after being exposed to other-dimensional energy alongside Robbie Baldwin AKA Speedball.

Goose definitely has a bigger fan base than Hairball at this point and it is unclear if he will return in the Captain Marvel sequel The Marvels on November 11, 2022, alongside Carol Danvers AKA Captain Marvel (Brie Larson) and Monica Rambeau (Teyonah Parris). He did not show in Avengers: Endgame (2019) alongside his owner and who knows how long a flerken can live.

Other Potential Pet Avengers Could Be Coming Soon

When Lockjaw first connected the Pet Avengers via telepathy he accidentally included Bo, President Barack Obama’s family dog. Bo had the Power Stone hidden in his collar but he did not have any powers. The MCU will most not likely include the First Dog in a potential Pet Avengers lineup.

However, it has been confirmed that the upcoming Hawkeye series will introduce one of the most beloved Marvel Comic canines – Lucky the Pizza Dog. Clint Barton AKA Hawkeye (Jeremy Renner) takes in the dog after he rescues him from the “Tracksuit Mafia”. For a dog with no powers, Lucky is more than capable of taking down bag guys in the comics.

One of the last major members of the Pet Avengers is Zabu, the sabretooth tiger. The tiger is the sidekick of Kevin Plunder aka Ka-Zar. Ka-Zar is essentially Marvel Comics’ version of Tarzan, who group in a prehistoric dimension of the Marvel Comics called Savage Land. The Savage Land is also the home to Devil Dinosaur, who will be showing up in the animated Moon Girl and Devil Dinosaur series on Disney XD, which is not a part of the MCU.

There have been rumors of the MCU working on a secret Jurassic Park-inspired movie. If it comes to fruition it could introduce either Zabu or Devil Dinosaur into the MCU. Either character could easily become a member of the Pet Avengers.

Other non-traditional characters floating in the Marvel Cinematic Multiverse that could join the Pet Avengers are Howard the Duck and Rocket Raccoon. But there is honestly no limit to what they could do for the Pet Avengers. Maybe even bring back Sparky from WandaVision, who was killed off too soon. He could come back as his synthenzoid version in the comics because who does not love a bright green dog?

Let us know in the comments if you think Marvel Studios should make the Pet Avengers?