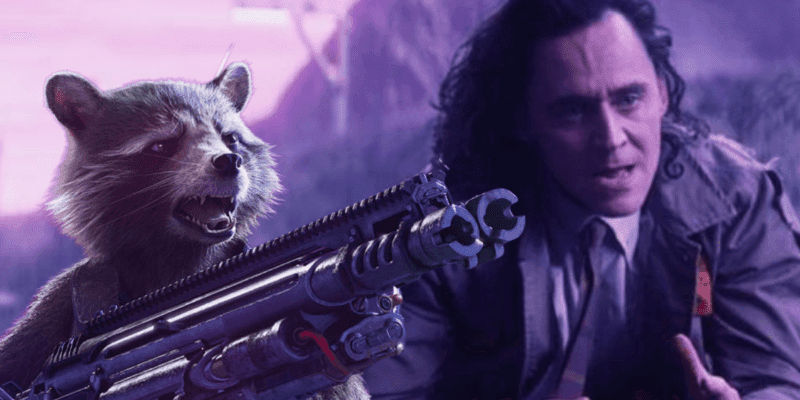 Marvel’s Loki series is currently available on Disney+ and for fans that cannot wait for Season 2, Marvel Studios dropped Assembled: The Making of Loki, which contains many amazing behind-the-scenes details for the latest Marvel Studios original series smash hit.

One of the details that has Marvel fans talking the most is a released piece of original concept art of a packed Time Variance Authority (TVA) waiting room. Tom Hiddleston’s Loki is waiting in a line to be processed for his crimes against the Sacred Timeline while Miss Minutes hovers menacingly overhead.

In the shot, fans can see a Skrull, members of Yondu’s (Michael Rooker) Ravagers, and most amazingly Bradley Cooper’s Rocket Raccoon!

Marvel fans’ favorite Trash Panda is decked out in a white jumpsuit, that would be replaced with the tan and orange that we got in the first episode of the Loki series. Who knows what crime the Guardian of the Galaxy committed to wind up in the TVA. But knowing Rocket Raccoon, the mischievous talking raccoon could have done anything.

But if the Ravagers that surround him give us any clue their Nexus Event probably occurred in Marvel’s Guardians of the Galaxy Vol. 2 (2017). It is one of the few times the MCU showed Rocket Raccoon without his teammates Peter Quill aka Star-Lord (Chris Pratt), Drax the Destroyer (Dave Bautista), Gamora (Zoe Saldana), and Mantis (Pom Klementieff) outside of Avengers: Endgame (2019), when only he and Nebula (Karen Gillan) remained. Rocket Raccoon is most closely associated with Groot (Vin Diesel). But sadly there was no Baby Groot to be seen in the concept art.

Rocket Raccoon and rest of Marvel’s Guardians of the Galaxy were introduced in Guardians of the Galaxy (2014) and the dark horse band of reluctant heroes quickly became as beloved as the Avengers. It was not revealed why the cameo was cut, but it could have been a scheduling issue with Bradley Cooper or Guardian’s Director James Gunn’s brother Sean Gunn, who does motion capture for Rocket Raccoon.

The God of Mischief barely missed meeting Rocket Raccoon after Thanos (Josh Brolin) killed him in Avengers: Infinity War (2018) just moments before the Guardians answered the distress beacon and saved the God of Thunder. Perhaps Rocket Raccoon even met a Loki variant in Classic Loki’s (Richard E. Grant) since he survived by disguising himself as wreckage.

What Else Was Cut From Loki?

This is not the first reveal of something that director Kate Herron and head writer Michael Waldron cut from the God of Mischief’s first solo story. While we got that amazing Lady Sif (Jamie Alexander) cameo, it was confirmed that there was an extended scene of Frog Thor or Throg as voiced by Chris Hemsworth where he took on the trickster god as he finally became King of Asgard.

Luckily, episode five of Loki – “Journey Into Mystery” – probably included more Easter eggs than any other property in the Marvel Cinematic Universe. So it’s hard to imagine they cut anything. Though Michael Waldron, who wrote a script for Lego Batman 2 that was never made, joked he kept trying to include Batman in Loki but couldn’t make it happen.

Assembled: The Making of Loki also revealed that fans could have gotten more of He Who Remains (Jonathon Majors) than we got in the finale. The discussion between the Frost Giant Prince and the Lady Loki variant Sylvie (Sophia Di Martino) was intended to go on for a bit longer. Perhaps it was shortened so that it lined up with the finale episode of WandaVision as some fans theorize.

One of the most ominous lines that was lost was He Who Remains saying, “You think I’m just here with you. Whoo! I am everywhere.” He wants the two Loki variants to really know that no matter what they chose to do he will just end up back at the Citadel at the End of Time again. Even though Sylvie unleashed the new Marvel Multiverse, eventually a new Kang variant will rise up and the Multiverse War again.

Owen Wilson’s character, TVA Agent Mobius M. Mobius, Hunter B-15 (Wunmi Mosaku), and Judge Ravonna Renslayer (Gugu Mbatha-Raw) will return later in Marvel Phase 4 when Loki Season 2 drops, hopefully as soon as fall 2022. Meanwhile, Tom Hiddleston will return as Loki in What if…?  on August 11, 2021, and then again in Doctor Strange in the Multiverse of Madness on March 25, 2022, alongside Doctor Stephen Strange (Benedict Cumberbatch) and Wanda Maximoff aka Scarlet Witch (Elizabeth Olsen).

Let us know in the comments below what you wish had been included in Loki Season 1.

Comments Off on ‘Loki’ Cut An Incredible Rocket Raccoon Cameo