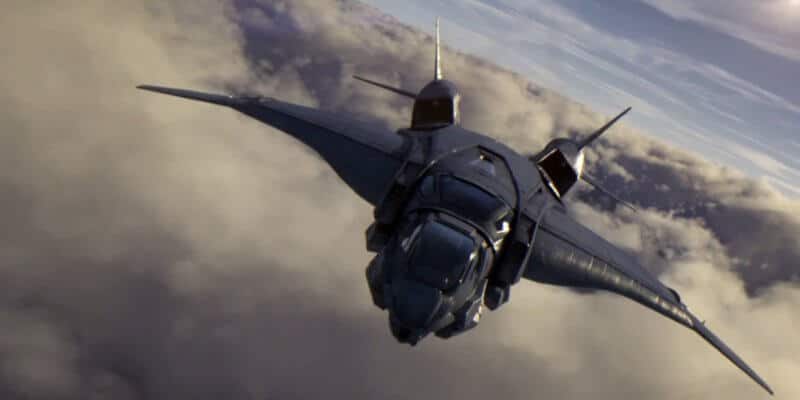 The Quinjet is the main method of transport used by the Avengers in the Marvel Cinematic Universe.

These swanky aircraft are capable of flight in space and sea, making them very versatile vehicles!

Here’s everything you need to know about the coolest plane in the Marvel Cinematic Universe.

Related: New Marvel Leak Has a Bizarre Take on Spider-Man

How the Quinjet was developed in the MCU

Who builds the Quinjets in the Marvel Cinematic Universe?

The Quinjet was developed by SHIELD, the secret organization first seen in Phase 1 of the MCU. It played a prominent role in The Avengers (2012) as a good chunk of that movie took place on the SHIELD Helicarrier, where many Quinjets were kept. Additionally, Tony Stark / Iron Man presumably contributed to later variations of the jet owned by the Avengers. In fact, Avengers: Age of Ultron (2015) showed that the jet had been altered to seamlessly land in Avengers Tower, formally known as Stark Tower.

In the Marvel comics, the jets were created in Wakanda by T’Challa / Black Panther and his team of scientists (known as the Wakanda Design Group). The jets were later improved by an adult Peter Parker, the CEO of Parker Industries, after the events of Civil War II.

In real life, you will find a Quinjet model at Avengers Campus. It certainly adds some magic to the Disney Park — you, too, can imagine you’re Thor or Captain America dealing with an Avengers level threat.

How much would a Quinjet cost?

It’s unknown how much any of the Quinjet variants in the Marvel Cinematic Universe cost to build. However, in the Marvel comics, a single Quinjet has been reported to be worth $250 million. That’s definitely not cheap, considering how many we’ve seen on screen in the MCU!

It’s pretty reasonable to assume that the cost of the jets seen in the movies are at least similar to the comics. In that case, SHIELD is lucky to have genius, billionaire, playboy, philanthropist Tony Stark on its side!

The jets are more impressive than any real-life counterparts, as they boast a sleek design, the ability to travel in several different conditions, and they boast extensive weaponry. They’re just what the Avengers need when going up against aliens like Loki and evil AIs like Ultron!

In terms of real-life, however, you can grab yourself a LEGO Quinjet for about $100!

Why was the Quinjet invented?

The jet was first seen in Captain Marvel (2019). This prototype is called the “Quad Jet” and it is one of the many Quinjet variants we’ve seen throughout the movies. The jets are state-of-the-art, making them perfect for transporting SHIELD agents. They boast an impressive array of weapons, cloaking devices, and they’re very, very fast.

Captain Marvel‘s Quadjet isn’t quite as impressive, but it’s still pretty awesome, especially as it was made during the 90s! Essentially, the vehicles have a joint purpose; for combat and quick travel around the world.

We would later see the Avengers use their own version of the jet to get to the various universe-ending threats in the blink of an eye. For example, Captain America, Black Widow, and Iron Man all board one after taking down Loki in Berlin. Unfortunately, future Avenger Thor crashes the party to take his devious brother back to Asgard.

Who uses Quinjets in the MCU?

Which members of S.H.I.E.L.D. are authorized to use the Quinjet?

We’ve seen several members of SHIELD and the Avengers operate the Quinjets in the past. They are generally reserved for high-ranking members of SHIELD staff like Phil Coulson and his team, Nick Fury, and Natasha Romanoff / Black Widow.

However, we’ve also seen several regular SHIELD agents piloting them throughout the movies, including in The Avengers, where a jet went toe-to-toe with the Hulk. It didn’t go so well, but the pilot survived to fight another day.

After the events of Captain America: The Winter Soldier (2014), however, all of the Quinjets were reclaimed by the U.S. military as SHIELD was revealed to be infested with HYDRA agents. This made things difficult for Coulson and company in Marvel‘s Agents of SHIELD, when they tried to steal one.

Which Avengers have piloted a Quinjet?

We’ve seen several of the Avengers pilot the Quinjet/Quadjet. Starting chronologically, Captain Marvel piloted the Quadjet, accompanied by a young Nick Fury. Later, in The Avengers we see Natasha Romanoff / Black Widow piloting the jet in an attempt to take down Loki. Famously the vehicle’s speakers are hijacked by Iron Man, who plays AC/DC’s “Shoot to Thrill” to announce his entrance.

We later see the Avengers Quinjet in Avengers: Age of Ultron. This specially designed jet is made exclusively for the use of the team and it boasts a pretty rad paint job. We’re shown that Hawkeye is an able pilot as he provides support for Captain America and Black Widow during the Battle of Seoul as they take on an enhanced Ultron. However, Ultron later takes control of the jet and nearly murders Hawkeye, but kills a redeemed Quicksilver instead.

Age of Ultron ends with the Hulk piloting the jet into the unknown depths of space. Two years later, both Hulk and the jet turn up in Thor: Ragnarok; one of the film‘s many hidden details and connections to the wider MCU. Thor tries to escape in the ship, but it’s unfortunately trashed by Hulk before he changes back into Bruce Banner.

We also see Captain America and Bucky Barnes pilot the ship in Captain America: Civil War (2016). The two fight hard to get past Iron Man‘s forces with the help of Falcon, Wanda, Ant Man, and Hawkeye. Sadly, only Steve and Bucky make it onto the jet before their final confrontation with Iron Man and Zemo.

After going rogue Cap, Natasha, and Sam Wilson (The Falcon) would use the jet whilst undercover. In Avengers: Infinity War (2018) they arrived in the jet to save Wanda and Vision, who were attacked by Thanos’ forces seeking Vision’s infinity stone. The reformed Avengers would then use the jet to fly to the battle of Wakanda.

Finally, Black Widow used the jet to find Hawkeye after the blip in Avengers: Endgame (2019).

Features of the MCU Quinjets?

What weapons are Quinjets equipped with?

These jets are not to be trifled with. As we saw in The Avengers and Avengers: Age of Ultron, the ships are equipped to deal with threats from enhanced individuals such as Loki and Ultron.

The main weapon that the jets use is a GAU-17 Gatling Gun, which allows it to fire off hundreds of bullets at a time. This weapon was used against The Hulk in The Avengers when Nick Fury wanted him removed from the Helicarrier. Hawkeye also used it to distract Ultron‘s lackeys as Black Widow infiltrated a truck containing the prototype of Vision. Later, it would also be this weapon that would sadly kill Quicksilver after Ultron took possession of the ship.

However, the ships also possess missiles that could be deadly in the wrong hands. We saw the destructive power of the Quinjets during the events of Captain America: The Winter Soldier as Cap came face to face with an enhanced jet.

How fast can a Quinjet go?

The Quinjet can reportedly reach speeds of Mach 2.1, making it an incredibly fast mode of transportation that would give Quicksilver a run for his money! They achieve this through their two giant jet engines on each wing and adjustable rotors. These rotors give it the ability to levitate and land vertically, which makes it far more versatile than a conventional jet.

According to Collider in an article about Avengers concept art;

Used primarily by the Avengers, the quinjet first appeared in The Avengers #61 (February 1969) and was designed by the Wakanda Design Group, headed by the Black Panther, T’Challa. Each one is equipped with VTOL capability and five turbojet engines. A quinjet can reach Mach 2.1. Two highly specialized ultra-large Quinjets were used to transport various superheroes through space in the Infinity Crusade mini-series. Quinjets are infamous for being destroyed soon after they appear. Also, in the New Avengers/Transformers crossover, the Decepticon Ramjet escapes, disguised as Captain America‘s quinjet.

Remember, you can check out a Quinjet for yourself at Avengers Campus!

How large is a Quinjet?

The different variants of the jet somewhat vary in size and shape. The average SHIELD Quinjet, for example, only seemed to be able to hold a dozen passengers, at a push.

However, the Avengers’ personal Quinjet looks to be much larger, perhaps to account for its greater weaponry and improved cloaking system. Additionally, this version of the jet even had space to carry Black Widow‘s motorcycle, which was deployed during the Battle of Seoul.

It’s worth noting that the original Quinjets had to be reasonably sized so that several of them could be deployed from and stored on the SHIELD Hellicarrier. However, the Avengers jet was much larger to cope with an ever-expanding roster of heroes. It’s fortunate that Doctor Strange and the other new members of Earth’s mightiest heroes weren’t around, or things may have gotten a little crowded!

Quinjet weaknesses in the MCU

Which MCU villains have taken down a Quinjet?

The one-time King of Asgard, Loki has been shown to successfully destroy a Quinjet. In the final act of The Avengers, Thor‘s brother easily took one of the jets out, using the power of his scepter. However, Hawkeye, Black Widow, and Captain America were all able to escape and start fighting in the Battle of New York.

Many Quinjets were destroyed by The Winter Soldier (Bucky Barnes) during the events of Captain America: The Winter Soldier. Near the end of the movie, Bucky took several out and commandeered the remaining jet to take him up to his final confrontation with Steve Rogers.

Finally, in Thor: Ragnarok, the Avengers Quinjet was rendered useless thanks to the incredibly destructive power of The Incredible Hulk.

What types of attacks are Quinjets susceptible to?

As the Quinjets were designed using Earth technology, they were susceptible to alien tech and magic. Loki was able to easily destroy the jet in The Avengers using the power of the mind stone, for example.

However, though they were well fortified and can withstand hits from standard military weaponry, heavy fire has also proved effective.

Yet the Quinjet also couldn’t withstand the might of a super soldier! The Winter Soldier was easily able to incapacitate several jets and Captain America destroyed a HYDRA-operated jet with his bare hands.

When you see a real-life Quinjet at Avengers Campus at Disneyland Resort, you’ll have to let us know if they have any other weaknesses!

Who has captured a Quinjet?

In The Avengers, a brainwashed Hawkeye and several mercenaries disguised as SHIELD agents took control of a stolen Quinjet in a bid to save Loki. Later, the Asgardian would use the same jet to make his escape before instigating the Battle of New York.

Age of Ultron concludes with the Hulk commandeering a jet, though as the character is a hero and an Avenger, it isn’t exactly stealing!

The final act of Captain America: Civil War sees Bucky and Steve successfully steal a jet from Leipzig-Halle Airport. The two confront team Iron Man and take part in an epic battle of heroes. However, thanks to a side-changing Black Widow, they’re able to escape and track down Baron Zemo in Siberia.

Cap, Sam, and Natasha later continue to use this stolen jet as their base of operations whilst “off the grid” up until the events of Avengers: Infinity War.

Comments Off on What Is a Quinjet In the Marvel Cinematic Universe?