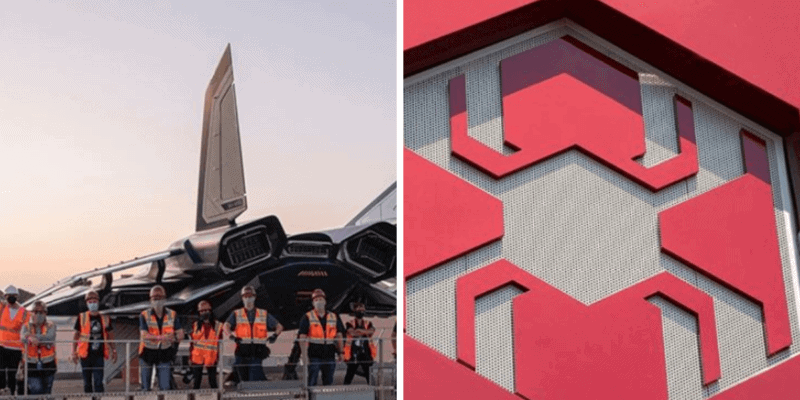 We’ve continued to share construction updates at Disney Parks and Resorts worldwide, and our latest update comes from the masterminds at Walt Disney Imagineering. Although Disney California Adventure is currently closed, construction continues at Avengers Campus, the new superhero land at Disneyland Resort.

Yesterday, we shared that Josh D’Amaro had given Disney fans a sneak peek of the all-new Avengers Campus land at Disney California Adventure. The Chairman of Disney Parks, Experiences and Products was given a tour of the land and even posed with a Quinjet. Fans were definitely excited to see that!

Walt Disney Imagineering also took to Instagram to share some images of the construction progress for the superhero-themed land. In the post below, you can see that the Quinjet has been set in place and the insignia for WEB SLINGERS: A Spider-Man Adventure has been installed. We can’t wait to ride the two attractions in this new land once they open in the future.

Take a look at the Instagram photo slideshow below:

Continued progress on #AvengersCampus at Disney California Adventure park with the arrival of the Quinjet and new attraction insignia for WEB SLINGERS: A Spider-Man Adventure.

A post shared by Walt Disney Imagineering (@waltdisneyimagineering) on Aug 19, 2020 at 4:45pm PDT

Disney pushed back the opening of Avengers Campus a few months ago. But even though we don’t yet know when the new land will open, like other Disney and Marvel fans we’re so excited to see the progress. Disney has confirmed that Avengers Campus is one of the Disney Parks construction projects that is moving forward, so we can’t wait for this land to open at Disneyland Resort in the future.

Disney’s official description of the land states, “Avengers Campus invites you to team up with the Avengers and their allies in a fully immersive land at Disney California Adventure park. Avengers Campus is comprised of several heroic locations—each hosted by a different Super Hero or their ally—to share their unique powers, technology and knowledge with recruits.”

Two more Avengers Campus locations are also being built at Disneyland Paris and Hong Kong Disneyland, so Marvel and Disney fans around the world can experience what it’s like to become an Avenger (or at least, the closest thing to one at a Disney Park).

Here is some of the concept art for two attractions in Avengers Campus at Disney California Adventure:

Are you excited to visit Avengers Campus when it opens at Disney California Adventure? Who is a Marvel superhero who you hope to meet in the new land? Let us know in the comments!

Disneyland Resort is currently accepting hotel reservations! Click here to work with an Authorized Disney Vacation Planner and book your next trip to the Happiest Place on Earth.