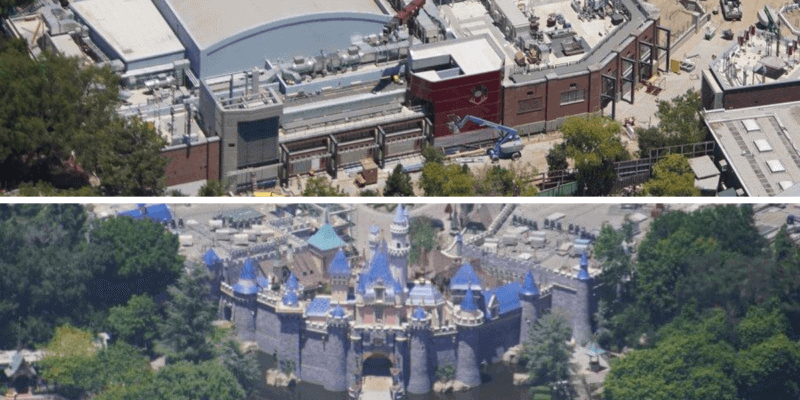 The reopening of Downtown Disney marked the beginning of the phased reopening of the Disneyland Resort. Since July 9, Downtown Disney has welcomed Guests to a small section of the Happiest Place on Earth. But even though Disneyland and Disney California Adventure remain closed for the time being, Disney is still moving forward with the construction of several projects at the resort.

According to a statement made this summer from Disney officials, Avengers Campus is one of the Disneyland Resort projects that is able to “surge forward.” However, Mickey & Minnie’s Runaway Railway is one of the DLR projects that will be “picked back up in stages.” Here’s what Walt Disney Imagineering’s Bill Weis has to say:

Aerial photos have provided glimpses at several other construction projects in addition to Avengers Campus and Mickey & Minnie’s Runaway Railway. We can see construction underway for the entrance to Frontierland and other lands through the Hub, scrim on Snow White’s Scary Adventures and King Arthur’s Carrousel, and other elements of the theme park getting minor aesthetic changes. It’s clear that Disney is making an effort when it comes to overall maintenance of Disneyland and Disney California Adventure even while they are closed.

Disney has also filed several permits this summer in order to move forward with construction projects at Disneyland Resort. We know that work has been done at Downtown Disney as well as the Simba parking lot — which is adjacent to the location of the new Disney Vacation Club tower at the Disneyland Hotel. Although a reopening date has not yet been announced for the Disneyland Hotel — and although we don’t yet know an opening date for the new DVC tower — it’s comforting for many to know that Disney is moving forward with the project.

Additionally, it was announced that Indiana Jones Adventure would be undergoing a refurbishment in 2020. However, that attraction is not currently listed as Closed for Refurbishment, and at this time we’re unsure if Disney has proceeded with the work that was scheduled for that attraction.

Related: Disneyland Only Accepting Reservations for Mid-Sept. and Beyond

We’ll continue to update Inside the Magic as more information is revealed about construction projects at Disneyland Resort.