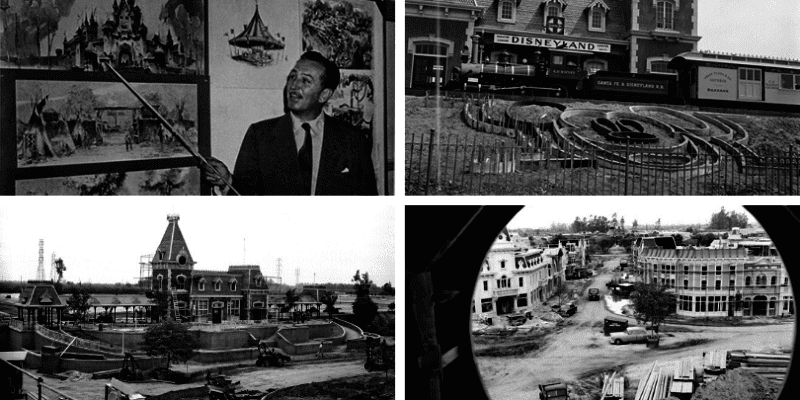 July 17, 2020 marks the 65th anniversary of the opening of the original Disneyland Park 65 years ago.  Though neither of the Disneyland theme parks are open, the Downtown Disney District has reopened last week.  This includes the flagship World of Disney store that is currently offering Disneyland 65th anniversary merchandise.  If you’re more comfortable celebrating virtually for now, you can do that too!

Disneyland always takes their anniversary celebrations very seriously, in a non-serious way!  It’s always so much fun and it’s like reliving its opening day.  We can only imagine what it would have felt like to be there on the opening day, but we sure do know that it was magical.  Walt Disney said, “To all who come to this happy place, welcome.”  So to celebrate Disneyland’s 65th anniversary, let’s take a look back at what it took to get to opening day on July 17th, 1955.

Well, it all started with a mouse and some imagination.  Walt Disney had a dream that he wanted to make happen for his kids and the kid in all of us.  With a piece of land in Anaheim, California where an orange grove used to stand, he made that happen.  After a year of construction, the doors opened to Guests at what we now know as the Happiest Place on Earth.

In a quick one-minute time-lapse, you can see Disneyland go from the minds of Imagineers to reality:

It took a lot of hard work and a team of incredible people to make everything in that video happen.  For a more in-depth look at what went into the construction of the original Disney Park in its first form, Disney has a photo series called, “Building the Dream.”  As a Disney fan, you’ll be able to see the intricate details that laid the foundation for a place that has touched the hearts and lives of so many people all over the world.

How are you celebrating Disneyland’s 65th anniversary at home? Let us know in the comments!

Remember: Disneyland is currently accepting new reservations for August 16 and beyond! To book your next trip, get in touch with an Authorized Disney Vacation Planner at Academy Travel, who can help you navigate all of the changes coming to the Disney Parks and ensure your vacation is magical.