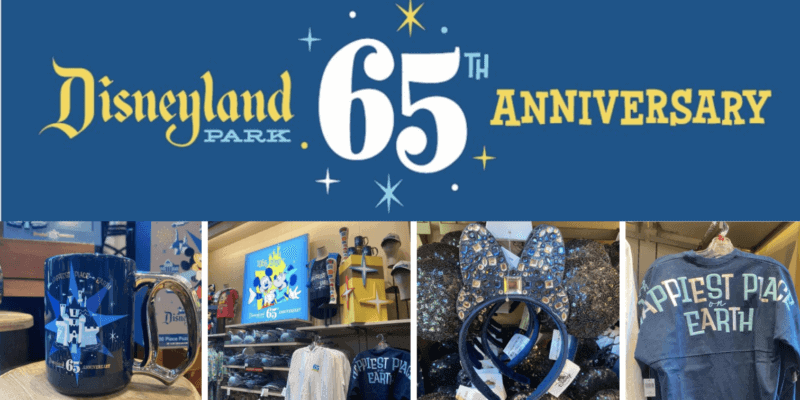 Amid the excitement of today’s Walt Disney World Resort AP Preview at Magic Kingdom and Animal Kingdom, there were also major happenings on the West Coast.

Even though Disneyland and Disney California Adventure theme parks won’t be reopening on July 17 as originally planned, Disneyland Resort’s Downtown Disney shopping and dining district reopened to the public with many of the same rules that Guests are required to abide by at Orlando’s Disney Springs.

All Downtown Disney District Guests are required to wear face masks for the duration of their visit and must practice social distancing protocols while browsing all of the open shops, including World of Disney. Here, we follow-up on our first look at the full line of Disneyland 65th Anniversary merchandise.

This blue Disneyland spirit jersey celebrates the first Disney theme park’s 65th anniversary with a Sleeping Beauty Castle logo on the front and “The Happiest Place on Earth” on the back. You know you want this for your Disney Parks spirit jersey collection!

This “65 Years of Magic” mug features the Disney park’s retro logo on the back and the official 65th anniversary castle graphic on the front. Our favorite detail? The handle looks exactly like the classic Disneyland “D” logo!

In addition to the new Minnie ear headband, DLR anniversary spirit jersey, and super cute mug, the Downtown Disney World of Disney store had much more 65th Anniversary merchandise, including the items in this apparel display (complete with mannequins wearing Disney face masks!)

This table display features the mugs and a cute Disneyland 65th Anniversary frame to remember your next Disneyland vacation following the park’s reopening.

What do you think about the collection of Disneyland 65th Anniversary merchandise? This writer loves it all!