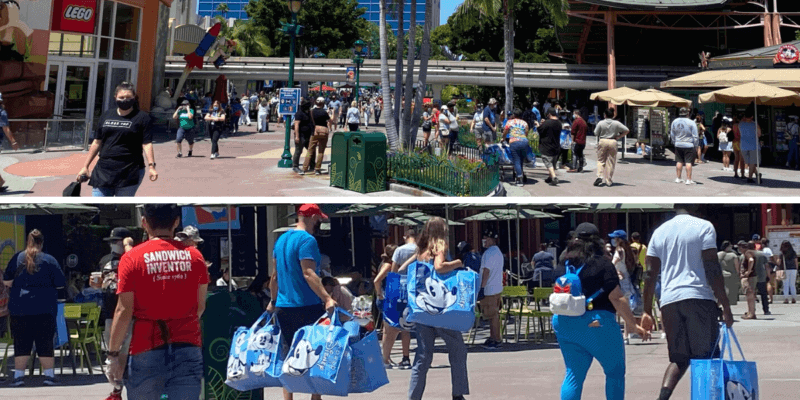 Downtown Disney officially reopened to the public today, and hours before the official reopening time, crowds began to flock to Disneyland Resort.

Even though the reopening of Disneyland, Disney California Adventure, and the Disney Resort hotels has been delayed until further notice from Disney and the state of California, the reopening of Downtown Disney still marks the beginning of the phased reopening of the Disneyland Resort, the Happiest Place on Earth. And fans flocked to the shopping, dining, and entertainment district to get a slice of the magic and a pinch of pixie dust, the most magic any Guest and Annual Passholder can feel on the west coast until Disneyland and DCA reopen.

Disney began letting Guests park in the Simba parking lot — the only Disneyland Resort parking lot open to Guests for the time being — well before the official 10 a.m. reopening time for Downtown Disney. Guests were able to enter the shopping, dining, and entertainment district before 10 a.m. as well. By 9:45 a.m., the Simba lot put a temporary pause on letting in new Guests, and cars were being turned away and asked to try returning at a later time. Crowds of cars continued to circle the perimeter of Disneyland Resort in hopes of getting to park at the Simba lot eventually.

Downtown Disney itself is implementing health and safety measures for the well being of Guests and Cast Members. Masks are required (read the official guidelines here), temperatures are checked (you must be below 100.4 degrees), and social distancing guidelines are in place throughout every shopping and dining location.

Cast Members were also present throughout Downtown Disney encouraging social distancing and mask wearing. In our experience, the only Guests we saw not wearing masks were those sitting down in dining areas eating or drinking.

Even though Disney has stated that Downtown Disney (and the rest of Disneyland Resort, once it opens) is implementing capacity restrictions, for the time being, we still found during our visit that there were significant crowds. To us, it felt like how crowds would be on a typical summer day visiting Disneyland Resort when the parks are open. This is likely due to it being reopening day and the first day that Guests could visit Disneyland Resort in nearly four months. Everyone just wants to experience the magic of Disney again, ourselves at Inside the Magic included.

However, because of the crowds, it was difficult to maintain social distancing in indoor areas, such as in World of Disney, which implemented a virtual queue in an effort to keep capacity low within the store. We found that Guests followed social distancing guidelines if there were markers on the ground telling Guests where to stand. But while just walking around Downtown Disney in general, it was clear that not all Guests were able to socially distance themselves from others, due to there being so many people visiting on the reopening day.

We encourage all Disney fans to head to Downtown Disney at Disneyland Resort if you want to add some pixie dust to your days during this time. Right now, Downtown Disney is a great place to visit for some magic. We know we will be back every chance we get. But we do advise you to keep social distancing in mind and visit during a time that may be less busy if you are concerned.

Just enjoying that classic Downtown Disney atmosphere! This marks the beginning of the phased reopening of Disneyland Resort. We’ll take all the magic we can get! #disneyland #downtowndisney @disneyland

Read More: Marceline’s Confectionery Welcoming Guests Back With a Taste of the Parks

We’d also like to thank all of the Cast Members who make magic at Disney Parks and Resorts. Cast Members went above and beyond to spread pixie dust at Downtown Disney for the reopening day. Every CM we encountered today was so kind and welcoming, and we are so thankful to have such great interactions with the people who make the Disney magic go ’round. Thank you for all you do for Guests and Disney fans!

We’ll continue to update Inside the Magic with more information on the phased reopening of Disneyland Resort as Disney announces it. And if you plan to visit Downtown Disney, we hope you have a wonderful, magical, pixie-dusted time at the Happiest Place on Earth.