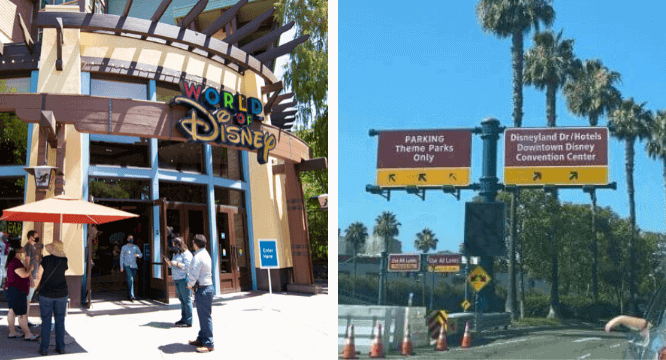 This morning, July 9th, Downtown Disney in California reopens. Being able to browse the Disneyland Resort shopping district is something Disney fans have been looking forward to since the closure of the Disney Park in March of 2020. But Guests arriving at the Disney area were paused in their car lines (some were turned away) as apparent overcrowding was occurring even before the shopping district opened for business.

When Inside the Magic reporters arrived in Anaheim on Thursday, they turned off the freeway, headed towards Downtown Disney at about 9:10am. They had been told earlier, by official Disney PR that the parking lot would be open at 9:45. Disney themselves had offered photos ahead of the official opening in hopes of attracting both new visitors and Disney shoppers alike. But Downtown Disney Parking Lots closed unexpectedly and started to turn cars away.

Traffic stalled and caused visitors to wait in their carline. In an attempt to reach the Simba parking lot, Cast Members paused traffic entering well before 10 am, PST. Cast Members are now telling Guests they should wait offsite for a little while and then drive back around to see if the lot reopens. No one was available for comment about why the lot was closed or when it would be reopened again.

Our reporters managed to park and make their way into “DTD” but the car lines to get into the Downtown Disney Parking Lots were visible to all visitors and snaked down the road. The photo below shows the long line of cars.

Other guests that arrived as Early Birds began lining up for World of Disney as soon as they could. Big lines followed, full of masked Disney guests, eager to get into the official Disney store. But it appears from twitter user @bmacdonald’s video below that social distancing was enforced as the line snaked through Downtown Disney.

The line for World of Disney at Downtown Disney (part 1) pic.twitter.com/Ljm5J0A9rm

Have you been able to get into Downtown Disney this morning? It’s going to be a popular destination as Disneyland Resort wakes up from her Sleeping Beauty spell. Let’s hope we can all get in and shop, eat and shop some more!

This is a developing story… please stay tuned to Inside the Magic!