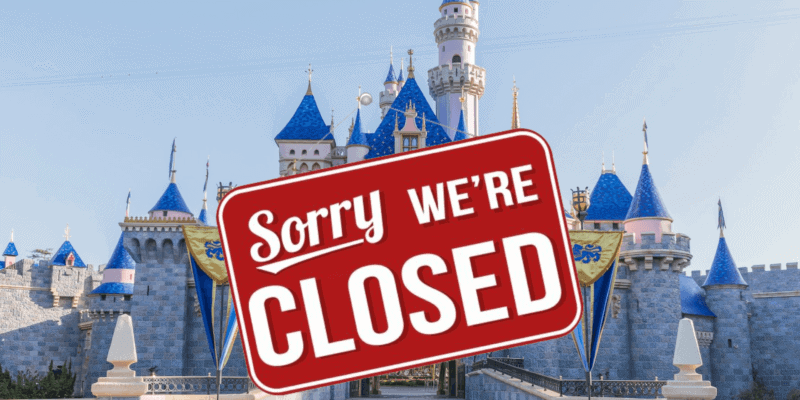 It’s finally here, folks. We’re closed. The Mouse out front shoulda told you… and we’re so sad about it.

Disney Parks News released a statement and graphic on Twitter on March 12, 2020, at approx. 4:30 pm that after careful consideration from the guidelines of the Governor, Disneyland Park and Disney California Adventure are proceeding with closure of both parks beginning the morning of March 14th through the end of the month (March 31). The Hotels of Disneyland Resort will remain open until Monday, March 16th to give guests the ability to make necessary arrangements. Downtown Disney will remain open.

This has been a very fluid situation starting with: Late Wednesday night, California Gov. Gavin Newsom announced a recommendation that all non-essential public gatherings over 250 people should be canceled until at least the end of March due to the spread of the coronavirus. He went on further to detail that smaller events could only proceed if people distance themselves from each other by at least 6 feet. Health officials have called this social distancing.

CBS Los Angeles later said, “Disneyland and other large theme parks, theaters and casinos are exempted from his order against gatherings of 250 people or more due to coronavirus due to the “complexity of their unique circumstances”, but discussions remain ongoing.” Governor Newsom spoke with former Disney CEO Bob Iger on the developments but did not go into specifics.

Then earlier today California Gov. Gavin Newsom stated “Disneyland and other large theme parks, theaters and casinos are exempted from his order against gatherings of 250 people or more due to coronavirus due to the “complexity of their unique circumstances”, but discussions remain ongoing.”

Disney will continue to pay its Cast Members during this unfortunate closure. Disneyland Resort will also work with guests who wish to change or cancel their visits. They will have a heavy call volume, so please be patient with Cast Members and phone operators as they guide you to a place of peace. Please contact The Walt Disney Travel Company for all questions, cancellations, and concerns at (714) 520-5050. They have issued a formal statement about the closure here.

Disneyland Resort has faced few closures in it’s more than 60-year history. Disneyland closed on Saturday, November 23, 1963, the day of mourning following the assassination of President Kennedy on November 22, 1963. The park closed for inspection after the 1994 Northridge Earthquake. And the terrorist attacks of September 11, 2001, occurred before Disneyland’s opening time; the park remained closed that day.