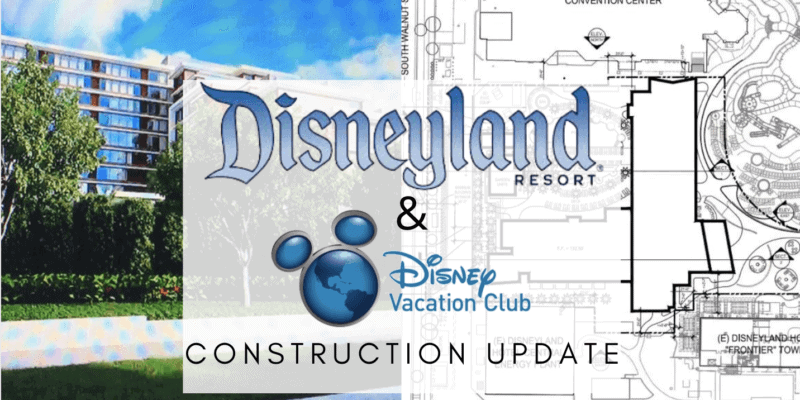 In a series of four Tweets yesterday, Twitter account @MagicAndWalnut shared up-to-date information about the construction of the Disney Vacation Club tower at Disneyland Hotel.

The first Tweet about the upcoming DVC addition stated that local residents, including the Disney fans behind Magic & Walnut were invited to a town hall webinar where details about the Disneyland Resort construction project were shared.

The new Disney resort tower will have 12 stories and an L-shaped design.

In their second Tweet about the new Disney Vacation Club tower, Magic & Walnut shared a map that shows exactly where the new, as yet unnamed, addition will be in the Disneyland Hotel complex.

It appears that the 12-story hotel tower will sit in front of a single-story pool area and will be located next to the existing 13-story Frontier Tower.

The #DisneylandHotel DVC complex will consist of one main 12-story tower with a separate, ground-level pool area directly behind it. (The adjacent Frontier Tower, by contrast, is 13 stories.) pic.twitter.com/zwlUVHJIia

In their next social media post about the ongoing Disneyland Resort construction project, Magic & Walnut shared information about how the new Disney theme park hotel will impact the aesthetics of the Anaheim neighborhood where it is being built.

This is, obviously, most pertinent to the local residents who were watching the webinar, but is also interesting for anyone who enjoys studying Disney Parks architecture. The new DVC tower will have a “stair-step” design, beginning at just five stories tall, to minimize its visual impact.

There is no timeline yet for when the project will begin construction or be completed. The plans are still under review by the city. Still, it was fascinating to learn the project has not been put on hold. pic.twitter.com/8xYfRPu3jZ

In their final Disney Vacation Club hotel update, Magic & Walnut shared that “there is no timeline for when the project will begin construction or be completed. The plans are still under review by the city.”

The Walt Disney Company recently filed a construction permit for this Disneyland DVC Resort project for both demolition and construction.

Whenever the new tower, which is likely to be named after a section of Disneyland Park like the other three Disneyland Hotel towers, is completed it will be just the second DVC property in California.

If you are a Disney Vacation Club member interested in learning more about this new timeshare option, contact DVC directly at 1 (800) 800-9800.

Are you excited about this new Disneyland DVC tower update? Stay tuned to Inside the Magic for the latest news about this project!