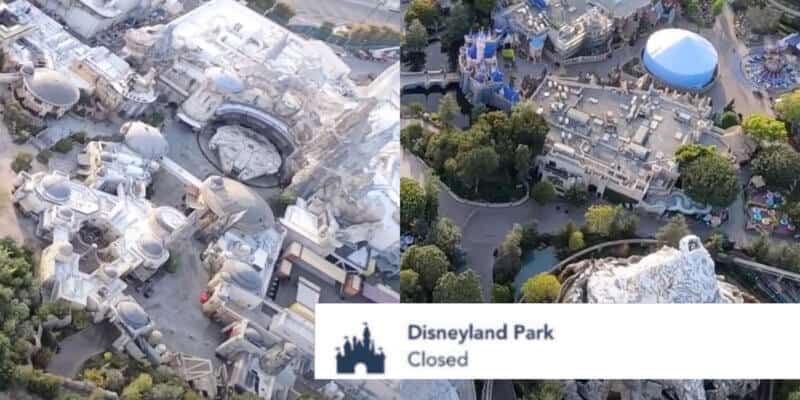 As we recently shared, Disneyland has pushed back all reservations for new vacations to July 1—a full month later than its originally announced June 1 date, which was believed to be the reopening of the temporarily closed theme park resort. This sad news comes with new footage of the Happiest Place on Earth continuing to sit empty with no sign of a reopening happening anytime soon.

In the footage seen in the video below from the OC Register, which shows a brief flyover of not only the Disney Parks but also different sections of Orange County, we see the Disneyland Esplanade eerily empty as the video begins its path over Disneyland Park.

This sad sight continues over the train station and onto Main Street U.S.A, all of which sits similarly abandoned. Other areas seen in the video include a quick flight over Sleeping Beauty Castle and the intergalactic Star Wars: Galaxy’s Edge.

As far as the Disneyland Resort theme parks in California, according to the latest state guidelines from Gov. Gavin Newsom, it’s been indicated that they may not reopen for months. This news comes due to the state’s decision to utilize a 4-stage set of guidelines–guidelines which include theme parks in its stage 3 or 4, which are predicted to be “months away” from now.

Currently, Gov. Gavin Newsom has moved the state of California to its second stage in this reopening process, which is being phased in gradually. According to the California Government’s website, this stage includes the gradual reopening of retail (curbside only), manufacturing and logistics. Later within this stage, this plan will also include relaxed retail restrictions, adapting and reopening schools, child care, offices and limited hospitality, and personal services.

What are your thoughts on the eerie sights of an empty Disneyland and the idea that theme park may not reopen until late Summer? Let us know in the comments!